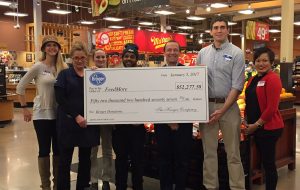 Kroger made a $52,000 donation to FeedMore in Central Virginia. (Courtesy Kroger)

The Down Syndrome Association of Greater Richmond has a new office space at 1504 Santa Rosa Road in Henrico. The new space will allow DSAGR to serve more families in Central Virginia. It currently serves 450.

Kroger made a $52,000 donation to FeedMore, a hunger relief organization for Central Virginia. The nonprofit expects to use the money, raised through national and local campaigns, to provide over 209,000 meals to families in need.

Sports Backers announced Anthem Blue Cross and Blue Shield as the title sponsor of its Anthem Corporate Run, a 5k run/walk at Innsbrook on June 8. Anthem also sponsors the Richmond Marathon and Moonlight Ride, both by Sports Backers.

The Bon Air Artists Association announced this year’s Artful Healing show, which will benefit the World Pediatric Project, a Richmond-based national charity serving critically ill children in the Caribbean and Central America. The art show will be held at UR’s Jepson Alumni Center on March 25 and 26.

Goochland Free Clinic and Family Services received a $400,000 grant from The Mary Morton Parsons Foundation. GFCFS is in the midst of a $5.9 million capital campaign to support the construction of a 20,000-square-foot facility.

VCU received a $3 million donation from Stuart Siegel, namesake of the Siegel Center. Siegel made the donation as a part of VCU’s Make It Real Campaign, which aims to raise $750 million by 2020.

Kabob Place opened in the Gold’s Gym Plaza at 8906 W. Broad St. in Glen Allen. The Indian and Pakistani restaurant offers takeout and dine in.