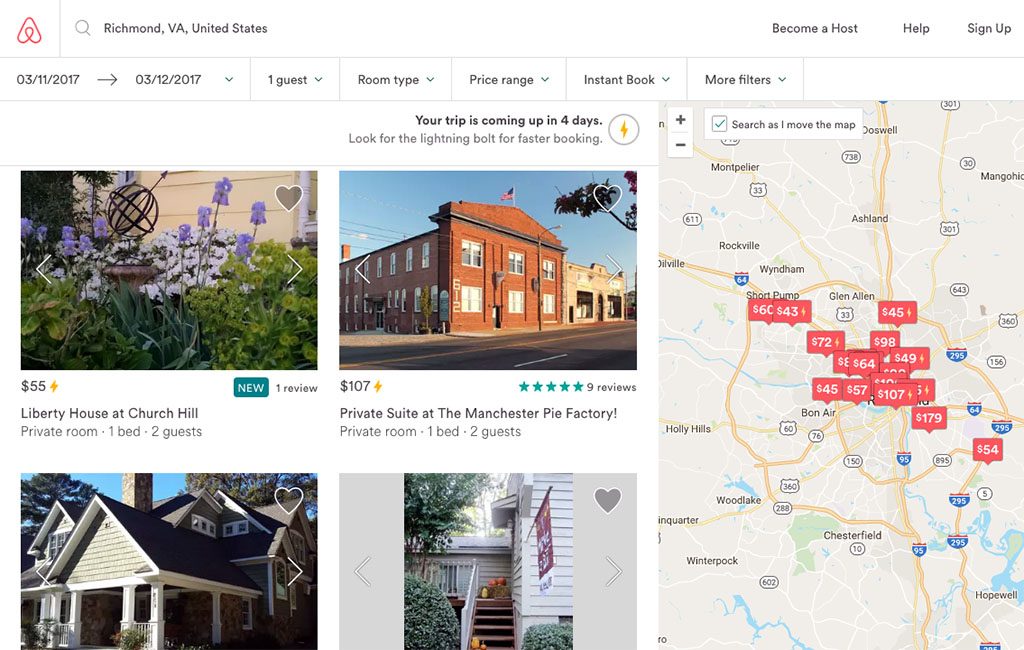 Airbnb had just over 130 rentals available in the first week of March.

The recently adjourned General Assembly passed a bill that would allow localities in the state to require people offering dwellings for short-term rentals to enter their names in a local registry. Localities also would be authorized to charge fees for that registry, and to levy fines on hosts who violate regulations.

The proposal, Senate Bill 1578, was introduced by Sens. Tommy Norment (R-Williamsburg) and Bill Stanley (R-Moneta). Gov. Terry McAuliffe has until March 27 to sign the bill into law.

The law would put a state stamp on regulations by localities that have varied across the state, prompted in part by the rise of online rental platforms such as Airbnb.

The issue came to a head locally in months leading up to the UCI Road World Championships in 2015. City zoning laws made rentals through Airbnb illegal, though enforcement was complaint driven. Neighboring localities took their own approaches to the issue.

Eric Terry, president of the Virginia Restaurant, Lodging and Travel Association, said the law would add consistency for local regulation of short-term rentals. The VRLTA lobbied for the bill, which also was supported by the Virginia Retail Federation.

“Airbnb is technically illegal in the city of Richmond, but it’s still operating,” he said. “There are various local restrictions which have pretty much been ignored by Airbnb, but this bill at least provides framework for some regulation.

“It’s not about competition with Airbnb. We think it’s here to stay,” Terry said. “We just think they should pay the same taxes we do and register as any other home-based business does.”

Airbnb said it plans to work with legislators on regulations that would allow it to continue operating in Virginia.

In a statement provided to Richmond BizSense, Airbnb spokesperson Crystal Davis said: “Just like we have in states like Arizona and Illinois, Airbnb is committed to continued discussions and work with lawmakers in the Commonwealth on regulations that allow us to collect and remit taxes on behalf of our hosts, ensure a good quality of life for communities, and benefit Virginia’s families overall.”