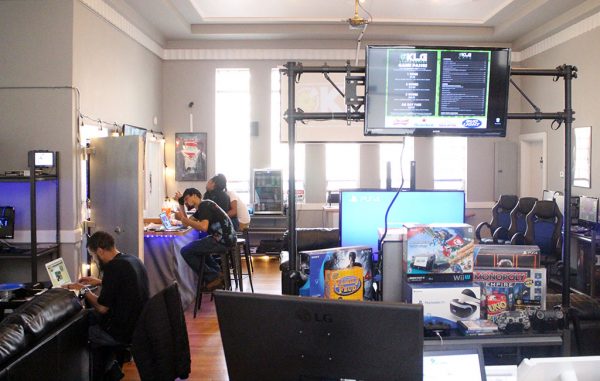 Outfitted with flat-screen TVs, couches, a projector and over a dozen video game consoles, a new arcade has opened in a part of town not necessarily known for recreation.

Instead of invoking nostalgia like a pair of bar-arcades set to open in Scott’s Addition, KLG’s 1,600-square-foot space features consoles like Xbox One, PCs and virtual reality headsets. Owner Kevin Gary described the space as a modern-day arcade.

Ever since he was a teenager growing up in Northside, Gary said he’s dreamed of opening a place like KLG. He said he was drawn downtown because of its proximity to VCU.

“We get a lot of foot traffic passing by, lots of VCU students,” Gary said. KLG serves food and drinks, and also hosts private parties, events and competitions, which Gary said is a big driver of business.

He said he invested nearly $50,000 in the business and has seven staff. KLG Gamer Lounge is leasing space from Gig Properties LLC. Gary said he hopes to expand KLG into the building’s basement.

KLG adds a second recreation option to that part of downtown, joining Greenleaf’s Pool Room, which opened in 2014.