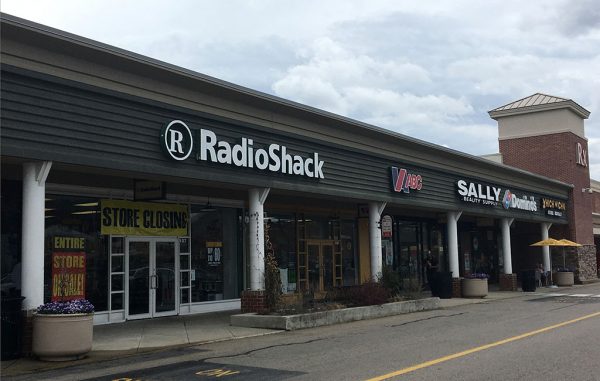 Radioshack will soon close its location in the Shops at Willow Lawn. (Michael Schwartz)

Stuck in bankruptcy for the second time in two years, a national electronics retailer is pulling the plug on the last of its Richmond locations.

RadioShack is closing its stores in the Willow Lawn and Dumbarton Square shopping centers. “Store closing” signs are up at both locations, though closing dates have not been set.

The two shops are the chain’s lone remaining stores in the Richmond area, according to the company’s website. The pending closures follow a March 8 release from RadioShack’s parent company, General Wireless Operations Inc., announcing its bankruptcy filing and the closure of 200 of its remaining 1,500 stores nationwide over the following month.

The company said it was “evaluating options on the remaining 1,300.”

A national powerhouse before the age of Best Buy and online retail, RadioShack’s last bankruptcy filing trickled down to Richmond in 2015, when it closed 11 of its then-17 locations in the area.

Willow Lawn representatives couldn’t be reached for comment on RadioShack’s departure. The storefront is adjacent to A.C. Moore, which is set to move elsewhere in the shopping center next year to make way for Dick’s Sporting Goods.

Broker Jim Ashby of Cushman & Wakefield | Thalhimer manages leasing for Dumbarton Square, at the corner of Dumbarton and Staples Mill roads. Ashby said he anticipates the RadioShack location to close soon, and the retailer is on a month-to-month lease.

RadioShack joins Bebe as the latest national retailer preparing to eliminate its brick-and-mortar presence in Richmond. The women’s clothing retailer is closing its lone area location at Stony Point Fashion Park – and all its stores nationwide – in favor of online sales.

Oh, I thought Radio Shack had closed years ago.

Radio Shack is simply irrelevant in today’s marketplace. My prediction is that all of their stores will close, someone will buy the rights to the name, and Radio Shack will then become an on line operation.

I’m with Kay, I thought they were already defunct. And most likely Brian is right, they’ll shut down for good sometime soon. I have a feeling there are other brick & mortar centric businesses that will be following soon…I’m looking at you Sears.

I’ve gone to this location only a couple times. I may be in the minority, but I always loved going to Radioshack to buy cables, components, tools, whatever. Even after it became really easy to buy parts online. It’s too bad basically everyone who’s worked in one in the last five or so years seemed very disinterested in helping you with anything.

Too bad I won’t have Radio Shack as a source for componets. I HATE ON LINES SHOPING.