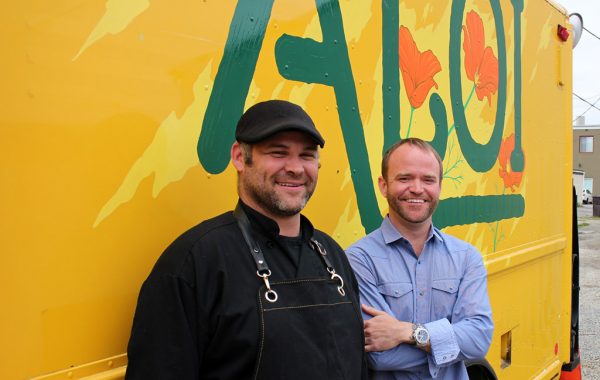 A local craftsman-turned-restaurateur is looking to pair food with furniture in the city’s most sought-after neighborhood.

Brandon Pearson, co-owner of the Sabai restaurant on West Broad Street, is opening a food truck called Aloi – Thai for “delicious” – in a lot behind his new furniture shop at 3103 W. Leigh St. in Scott’s Addition.

The shop, Pearson Furnishing, will sell custom-made tables, chairs and other furniture, including pieces that food truck customers will use on the site’s back lot.

“I wanted to be able to blend the two concepts together,” said Pearson, who moved into the space in November. “Obviously having them both in one place is going to be good for business, and provide the neighborhood with more options.”

The furniture workshop is applying finishing touches and will open a few weeks after Aloi’s opening. The food truck will serve more as a decorative mainstay to a back lot that will be transformed with overhead string lighting, an herb and vegetable garden and a converted shipping container for an event space.

“This lot is going to look very different when we finish up,” Pearson said. “It’s going to showcase the furniture we make and the food we’re going to make.”

Pearson is partnering with chef Scott Davies. While the name of the truck is Thailand-based, Davies said the dishes will showcase seasonal foods grown in California orchards and farms.

“We’re going to prepare a lot of dishes that use ingredients and vegetables grown in California,” Davies said. “Everything is going to be done in house.”

Davies and Pearson have struck deals with nearby breweries Ardent and Veil to use some of their brews in its recipes, which the breweries in turn plan to serve for their customers.

Blended menu items include a sweet potato dauphinoise, which will use Ardent’s sweet potato and sage farmhouse ale as an ingredient. Aloi also will serve crispy braised bacon and grilled seasonal fruit.

“It’s not going to be a typical food truck. We’re going to serve dishes that are comparable to what you would receive at a restaurant in both quality and size,” Pearson said.

Aloi also plans to add food-delivery service in the future, Pearson said. He added people also can pick up orders to go.

Aloi will park on the Leigh Street lot about 70 percent of the time, Pearson said, and also will make stops offsite, mostly to Scott’s Addition breweries.