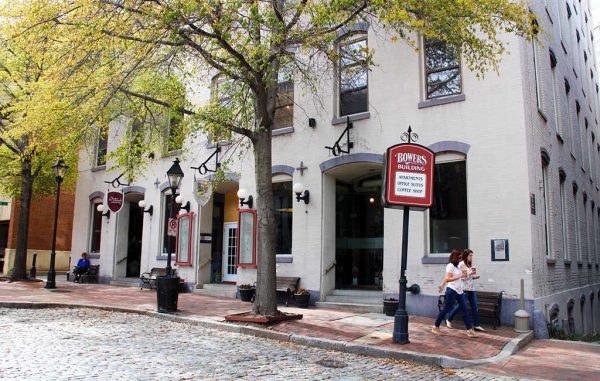 The office is on the ground floor of the Bowers Building in Shockoe Slip, beside The Martin Agency. (Jonathan Spiers)

A Wisconsin-based architecture firm with a 14-year track record in Virginia has picked Richmond for its fourth office and Mid-Atlantic hub.

Kahler Slater, which has offices in Singapore, Madison, Wisconsin, and its hometown of Milwaukee, is setting up shop in Shockoe Slip, filling a 1,000-square-foot space previously occupied by digital agency HeliumStudio, which moved up the street late last year.

“Our clients have been asking us to be more present in the state of Virginia,” said Al Krueger, who is leading Kahler Slater’s Richmond office with associate principal Kim Bruffy. “They’ve always said, ‘Be here for us more often.’ So we’re here. We’re putting our stake in the ground.”

Krueger said the company was drawn to the building’s location beside The Martin Agency and near other architecture and design firms around the Slip, such as Commonwealth Architects across the street and SMBW Architects and Baskervill farther east. 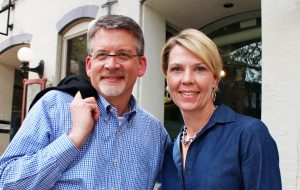 “We were thinking if The Martin Agency, an international ad agency, has their headquarters here in Shockoe Slip, it’s a great draw for talent. It’s a great kind of melting-pot neighborhood,” Krueger said.

Bruffy, a Virginia Tech grad who grew up in Richmond, joined Kahler Slater 18 months ago after stints at Marcellus Wright Cox Architects, KSA Interiors, the University of Richmond, and most recently HKS Architects in Shockoe Bottom.

“It was just a great opportunity to work in a national position,” said Bruffy, who serves as national director of business development for healthcare. The firm has 130 employees.

Since securing its Richmond office, which is slated to open in May, Kahler Slater has hired an architect to lead its local operations – fellow HKS veteran David Schmitzerle – who is moving from Detroit and brings 20 years of healthcare design experience. Krueger said the firm intends to make as many as 10 local hires initially, capping the headcount around 20 long term.

“There’s a great pool of design talent in Richmond that we’re really interested in getting to know a little bit better, and we’re talking to some key people,” he said.

Elsewhere in Scott’s Addition, local firm 510 Architects is setting up shop in the HandCraft building. And last year, Buffalo-based Wendel made its local presence known when it acquired Evolve Architecture, which remains active out of its downtown office.