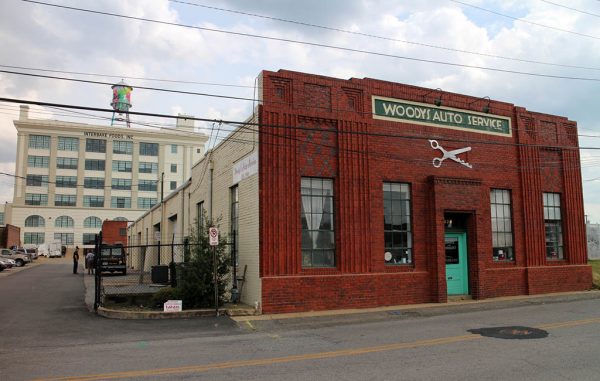 A nearly century-old building in the thick of the urban revival taking place along Boulevard has been snatched up by an out-of-town developer.

Charlotte-based MPV Properties closed Monday on the Woody’s Auto Service building at 929 Myers St., beside the Cookie Factory Lofts and between the Aldi grocery store and the site of a planned bowling alley.

The seller was 929 Associates LC, an entity tied to Woody’s co-owners and brothers Steven and Glenn Payne. It purchased the property in 2002 for $212,500. Nathan Shor of S.L. Nusbaum Realty represented the seller.

A recent city assessment valued the property at $576,000. The larger building of the two was built in 1928.

A call to Woody’s was referred to Steven Payne, who could not be reached Wednesday afternoon.

A message left with MPV was not returned before deadline. The company’s website says it has developed more than 4,000 acres and 3.5 million square feet of office, industrial and commercial property over 25 years. Its completed developments and property portfolio are concentrated around Charlotte.

An MPV flier online markets the property for lease as retail or restaurant space. It notes the site’s proximity to Scott’s Addition and the Fan, as well as to neighboring retail, museums and the Redskins training camp facility.

Attempts on Wednesday to reach three MPV agents listed on the flier were unsuccessful.

According to its website, Woody’s has been operating at the site for 25 of the 30-plus years it’s been in business. The auto service and repair shop is family owned and operated.

Part of the building fronting Myers Street is leased to Smoke & Mirrors Salon, which has a message on its website acknowledging the sale of the property. The message says the salon will close April 28.

Stylist Sara Pecora said she and Smoke & Mirrors’ three other stylists are moving to other salons: Pecora to The Hive Salon in Scott’s Addition, and the others to salons in Lakeside, Carytown and West Broad Village.

Pecora said the space has been used as a salon for about six years, the past three as Smoke & Mirrors. She said they were told the building would be put up for sale, though she said the closing came sooner than expected.

“From what they had told us, their eventual plans were to probably put it on the market in the next five to seven years,” Pecora said. “So it happened sooner than they anticipated, but I’m sure it was a good offer – the area is so hot right now – that it totally makes sense for them.”

The sale continues a wave of investment in the area along Boulevard across from Scott’s Addition. Next door, a development team recently signed a long-term land lease with Interbake Retail Partners LLC for a planned $5 million, 25,000-square-foot bowling alley.

Farther north, the former Car Pool property at 1203 N. Boulevard sold in 2015 for $1 million to an entity tied to Ed Lacy, whose properties in the area include the neighboring Cort Furniture building. Around the same time, local production studio Park Group moved its Shockoe Bottom facility to a space adjoining that building.

Note: This story has been updated to include Glenn Payne as co-owner of Woody’s Auto Service.

I’ve been a customer of Woodys for years and will miss them but I can’t say I blame them for cashing in on the spaz out “revitalization” hype. May as well get it now before the millennials credit runs out and the bubble crashes.

Maybe we’ll get a brewery in the space…..