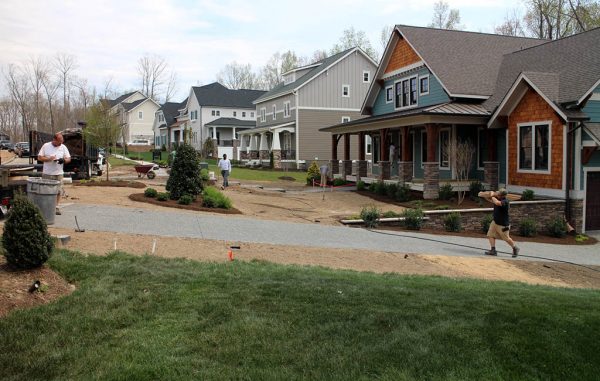 A new trend in new-home buying is catching on in Richmond’s newer neighborhoods.

Model home courts are popping up in communities such as Midlothian’s Hallsley, which is unveiling its cluster of eight model homes built and furnished by its roster of approved builders and designers.

“Up until now, for consumers to tour multiple builders, they had to drive around with a map or try and follow it off of the website,” Pollard said. “This was an effort to streamline the process for the visitors so they only have to go to one street, park and get out, and they can meet multiple builders at one time.”

Pollard said the builders are required to keep their models open in the court for one year, after which they could be sold to homebuyers. She said offers can be made on the models before then, but the homes cannot be occupied before the year is up. 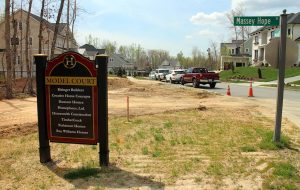 Hallsley is opening its eight model homes this week for tours. (Jonathan Spiers)

Hallsley is opening the models this week with an agent preview event Tuesday and extended-hour open houses for the public over the next two weekends, April 22-23 and 29-30. The models will remain open daily from noon to 5 p.m. with no admission fee.

Designers and landscapers were putting finishing touches on the models last week. Among them was Brian Perkinson, founder of Perkinson Homes, who said he expects the court to result in greater traffic and more home sales.

“Having an isolated model really doesn’t do much justice, because most people are going to be following the signs that the neighborhood and the developer put together,” said Perkinson, whose company has sold about 30 homes in Hallsley in the past three years and has 15 sites available and eight homes under construction.

With the court, Perkinson said, “your traffic is going to be highly driven to this one street. I think it’s an awesome idea to have them all on one street.”

Hallsley isn’t the only residential community picking up on the model court trend. Nearby, RounTrey, which hosted 2015’s Homearama and is hosting this year’s showcase in its NewMarket neighborhood (Hallsley hosted last year’s), is likewise wrapping up a cluster of seven models, soon to be nine.

RounTrey developer Danny Sowers said the court will help showcase the community’s 13 preferred builders. The models are being built near the community’s new clubhouse, likewise under construction in RounTrey’s Graythorne section near its entrance off Watermill Parkway.

“We tried to get ours as close to the front of the neighborhood as possible, so as the traffic comes in, we can capture them,” Sowers said. “It’s a new trend for newer communities like RounTrey.”

RounTrey’s MAP of their development shows the Powhite Parkway extension going through their neighborhood.

Stop saying that this road will be extended soon.
Simply not true.