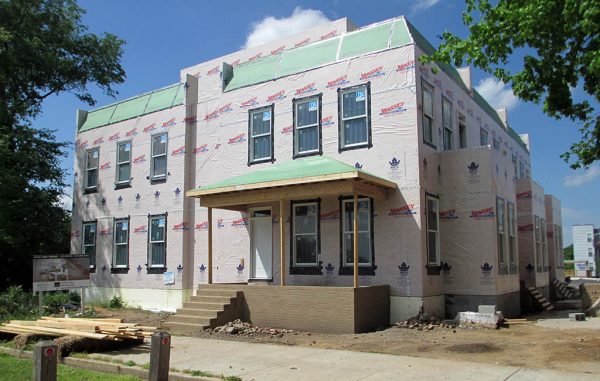 Three condos are under construction at the western end of Princess Anne Avenue across from Jefferson Park. (Jonathan Spiers)

A local developer with a track record in green-building projects has picked a bluff overlooking downtown for his latest residential project.

Hollyport Ventures, led by Richmond native Richard Cross, has started construction on a cluster of three modern townhome-style condos at the western end of Princess Anne Avenue across from Jefferson Park, on the bluff of Union Hill overlooking the city skyline.

Cross said the site presented significant challenges, including extensive soil testing to design the homes’ foundations, as well as its location in a historic district, requiring approval from the city’s Commission of Architectural Review.

“Princess Anne is a wonderful street, beautiful homes, and we had to be compatible with – but discernibly different from – that existing housing stock,” Cross said. “It took us about a year and a number of different proposals, and finally we worked out with the CAR the exterior design.” 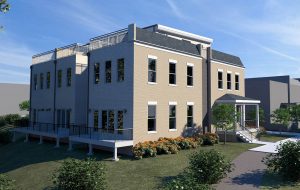 A rendering of the planned energy-efficient townhomes with “thin brick” exterior veneers and hookups for rooftop solar panels. (One South Realty)

Tucked between the park and the neighboring Shockoe Valley View apartments, Cross said the project went through several configurations, to fit as many homes on the site as possible and to take full advantage of the city and park views.

“We wanted to maximize the views of the exterior, and provide as many houses on that piece of property as possible,” he said. “Three was the right number. Four, the houses would have been too small.”

The units range from 2,500 to 2,650 square feet, each with three bedrooms, 3½ bathrooms, rooftop decks and designated parking. The homes were designed by Cross’s son, Washington, D.C.-based architect R. Michael Cross.

“It took us about six months to get out of the dirt,” Cross said. “We put in 37 pilings 35 feet deep, filled the holes with concrete and put a highly structured grade beam on top of that, and then we drilled – for the geothermal system – vertical wells 300 feet deep.”

Declining to disclose the overall cost of the project, Cross said with a laugh: “I put a lot of money into that dirt.”

Construction is now vertical, and Cross said the units should be finished by mid- to late-summer. Andrea Levine of One South Realty Group is marketing the units, which hit the market this month.

The general contractor is Jay Epstein, a fellow green-builder whose Williamsburg-based company, Health-E-Community Enterprise of Virginia, is behind the solar-powered Villas at Rocketts Landing subdivision in Richmond’s Fulton area.

Epstein and Cross both were recognized last week at green-building group Viridiant’s annual Sustainable Leadership Awards – Epstein for a house in the Villas at Rocketts Landing; Cross for his renovation of a 1909 home in the Fan.

That renovation, along with another on Augusta Avenue near Willow Lawn, earned platinum LEED certification – the highest-possible certification awarded by the U.S. Green Building Council.

Cross, a UVA grad with an MBA from UR, said he got into green-building through his son. The 66-year-old previously worked for Best Products before co-starting and selling a software company. He is also a managing director with Fahrenheit Group, a local accounting and finance consulting firm.

Developer Matt Jarreau is eyeing mixed-use projects on vacant triangular lots in the area of 23rd Street, and Zach Kennedy of Upward Builders completed a modern house on M Street. Both are also adding new homes in Sugar Bottom.

I am thrilled to be a part of this incredible project. Please visit us at http://www.JeffersonGreenRVA.com