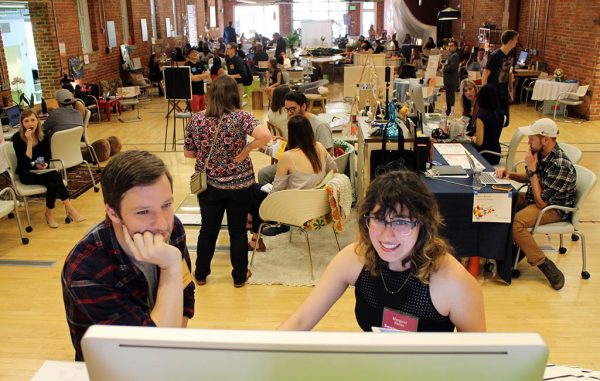 The VCU Brandcenter became recruitment central last week, as representatives of about 140 companies converged on the graduate school for its annual recruiter session, or reverse career fair.

Unlike traditional career fairs, where students line up to talk with employers, the Brandcenter sessions have recruiters vie for time with the in-demand students, who distinguish themselves with personalized stations reflecting their personalities and two years’ worth of work.

About 250 recruiters for local and national ad agencies, brands and headhunting firms met Wednesday and Thursday with this year’s crop of 102 graduates – the 20th graduating class for the school, which celebrated reaching the two-decade mark last year. Thirty of the recruiters were Brandcenter alums. 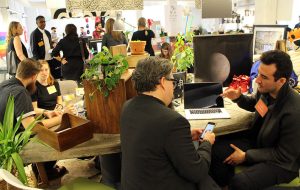 Recruiters came from local and national ad agencies, as well as brands like Under Armour and CarMax. Jonathan Spiers)

Ashley Sommardahl, student affairs and industry outreach director for the Brandcenter and a member of its first graduating class, said each year’s session has more participation from companies building their internal branding teams.

“It’s not just advertising agencies coming to see the students, but companies and major brands,” Sommardahl said. “It’s a trend in our industry … more and more of our students are going to work directly for brands.”

The Brandcenter typically has a 97 percent job placement rate or better each year. Over 20 years, it has graduated more than 1,000 students.