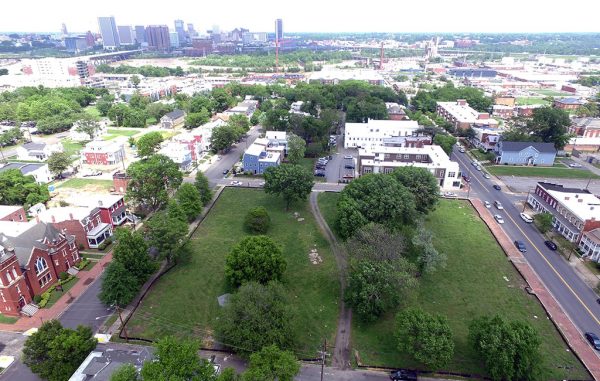 Two of Manchester’s most prolific developers are ready to move earth on a project they began plotting more than two years ago.

Robin Miller and Dan Gecker’s Urban Development Associates is preparing to break ground on a 2-acre, 78-unit residential development that will encompass a city block bounded by Bainbridge, Porter, 12th and 13th streets.

Dubbed Manchester Green, the site will house single-family townhomes and duplexes. The project may also include condos, depending on the direction of the market.

Work is set to begin in coming weeks to connect the site to city utilities, such as water and sewer, Miller said. Crews also are set to begin construction an alleyway on the site.

Miller said Manchester Green would take two to four years to develop. Richmond-based Apex Design is the architect on the project, while Xenith Bank is providing financing. Richmond-based Monroe Properties, which Miller co-owns, will market and sell the homes.

The general contractor is Horizon Construction Management, which Miller said has completed most of Urban Development’s projects in Manchester.

The first phase will start on Porter Street, Miller said, consisting of 10 single-family or duplex lots. It also will include one multifamily building on 12th Street and about 18 rental units that could later convert to condos. A similar setup is planned for the second phase, at the corner of Bainbridge and 13th streets.

“We expect to have both homeowners and renters living in Manchester Green,” Miller said. “The exact mix of owners versus renters will depend on the market demand.” 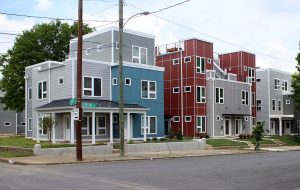 The first set of single-family townhomes, which could be under construction by the summer, will be priced in the mid-$300,000 range. Miller said if the firm converts some of the planned rental units into condos, they would cost between $150,000 and $250,000.

Other amenities include a central park area, playground, dog park, raised bed garden sites, outdoor grills and picnic area. A homeowners association will manage the upkeep of the property.

Manchester Green also will include come commercial components. The site is zoned R-63 – a mixed-use designation that allows for a variety of housing and some small commercial uses on corner lots.

Miller said the company looks to build about 3,000 square feet of retail space – 1,500 square feet on two corners of the block – to accommodate small retail uses such as a coffee shop or store.

A prototype of Manchester Green’s residential portion already is displayed nearby in the neighborhood.

Much of that block sat vacant for years, but over the course of one year, Miller and Gecker have filled the site with eight new townhomes, each selling for up to $440,000.

“That was really all the evidence we needed to know to move forward with Manchester Green,” Miller said. “Manchester is ready to take the next step, and that’s adding more product and density to the area.”

Manchester is familiar territory for Miller and Gecker. Along with Purcell Construction, they developed 1200 Semmes, a 129-unit complex on Semmes Avenue. They also were responsible for 909 Perry Street Apartments, consisting of 44 units, and the 80-unit Old Manchester Lofts.

The group owns 80 to 90 parcels in the neighborhood, totaling about 20 acres.

Manchester Green will add to a flurry of new residential units planned or under construction in the neighborhood. Work is underway on a 10-story residential tower in Thalhimer Realty Partner’s City View Landing development at 505 Porter St., provisionally called Reynolds South Tower.

Thalhimer is readying other components of City View Landing, including 37,000 square feet of retail space on 2.8 acres between Bainbridge and Hull streets. The section will include 135 apartments above the retail, most of which will front Hull Street.

Manchester continues it’s rebirth. Miller’s and Gecker’s purchase of the VMF properties years ago is paying dividends today, but not without their considerable foresight and investment. There’s a lot of exciting new development coming soon to the neighborhood.