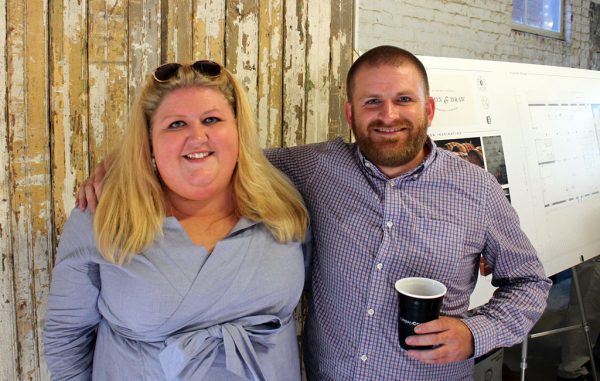 After a year of fermenting in the suburbs, a Chesterfield brewery is spilling into the Fan.

Steam Bell Beer Works is opening a satellite location called Canon & Draw Brewing Co. at 1527-29 W. Main St. The company is signing a lease for the space, which is taking shape in a redeveloped mixed-use project headed by Blackwood Development and P&J Properties.

Steam Bell owner and head brewer Brad Cooper said his company is targeting a late summer or early fall opening for Canon & Draw. It will house a seven-barrel brewing system and offer a different portfolio of beers than Steam Bell.

“It’s going to be a lot more IPA-heavy, which is something we’ve chosen not to do out here,” Cooper said, referring to Steam Bell’s beer selection in Chesterfield at 1717 Oak Lake Blvd. “I’m looking at doing some lagers as well.”

Brittany Cooper, who runs the business with brother Brad, said they won’t have a kitchen in Canon & Draw, but are in talks with local restaurants and vendors to provide food.

Canon & Draw will occupy two retail spaces in the recently renovated building, which has been dubbed The Eclipse. Nolen Blackwood of Blackwood Development said the renovation of the building cost around $3 million. The Eclipse has 16 apartments above Canon & Draw, ranging from 550 to 950 square feet.

Dale Smith and Jay Ashcraft of Joyner Commercial represented Steam Bell in the lease on Main Street. UrbanCore Construction is building the space, with Bruce Perretz of Perretz & Young as the architect and Campfire & Co. as the interior designer.

Brad Cooper said Canon & Draw will have a unique aesthetic, with production hardware at the front of the building in coppery barrels, in lieu of the more traditional steel barrels.

The production area will take up about 650 square feet of the 5,000-square-foot space, with the rest devoted to a tasting room. 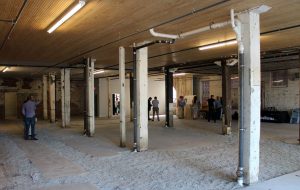 Canon & Draw will have a partition dividing the tasting room area for private events. (Mike Platania)

The announcement comes a few months after Steam Bell completed a $1 million capital raise. Brad Cooper said some of that money is going into Canon & Draw, but did not specify how much.

Satellite taprooms recently have been popular among Virginia breweries. Center of the Universe Brewing opened Origin Beer Lab in downtown Ashland in February, and Hardywood Park Craft Brewery opened a smaller taproom for experimental brews in Charlottesville in March.

Legend Brewing is preparing to open a smaller taproom in Portsmouth, and Strangeways is doing the same in Fredericksburg.

Back in Chesterfield, Steam Bell is expanding its home base. Brad Cooper said the company signed a lease for an additional 3,000 square feet of adjoining space, which will be used in 2018 for production and its first foray into small-scale packaging.

And it won’t just be beer that Steam Bell and Canon & Draw will bottle. As a side venture to cater to those who don’t imbibe, the Coopers started Trussings Craft Fizz, a line of sodas currently on tap at Steam Bell.

“We’ve seen issues with people who’d come here and were designated drivers, pregnant women or gluten free. We came up with this as a way to include them,” Brad Cooper said.

With Canon & Draw looking at late summer for its opening, a few other new booze-makers in town are hoping to open their doors a bit sooner.

In Scott’s Addition, Väsen Brewing and Richmond Wine Station aim to open this spring, while Intermission Beer Co. and Fine Creek Brewing Co. are seeking to do the same in Henrico and Powhatan, respectively.