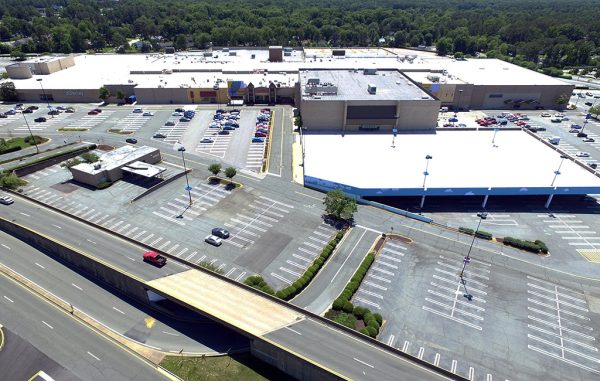 With leases in play for a movie multiplex, an indoor trampoline park and a West Coast pizza chain’s first Richmond location, the future of a long-struggling West End mall is beginning to take shape.

Regency Square has a deal in the works to sign Regal Cinemas for a 10- to 12-screen movie theater in the aging, soon-to-be-rehabbed mall. And leases have been signed to add a Chipotle, Sprint, Starbucks and MOD Pizza, helping jumpstart heavy construction on the property this summer.

The Regal Cinemas complex is listed as “coming soon” in a flier circulated by Cushman & Wakefield | Thalhimer, and the pending lease was confirmed Tuesday by Rob Hargett, a principal with Midlothian-based development firm Rebkee Co.

Rebkee and Thalhimer Realty Partners, the brokerage’s development arm, purchased much of the mall property for $13 million in February 2015, and have since unveiled a $35 million plan to revive the mall and add new construction on surrounding acreage.

Hargett also confirmed a pending lease with Jumpology, a national chain of indoor trampoline parks that has a location near Virginia Center Commons. He said talks are ongoing with other national retailers, including Ross Dress For Less and TJ Maxx.

All that action should allow heavy construction to begin in July, Hargett said.

That will include construction of a 7,500-square-foot outparcel retail strip for Seattle-based MOD, Sprint and Chipotle; transformation of an onsite former Bank of America branch into a Starbucks; and façade improvements to much of the existing mall.

Hargett said work will begin to reconfigure entry to the mall from Quioccasin Road, which would demolish the existing flyover and create a four-way signalized intersection with the neighboring Walmart-anchored Parham Plaza Shopping Center. It’s a measure that will improve the mall’s visibility along Quioccasin Road, which sees more than 25,000 cars pass each day, Hargett said.

“Getting that flyover taken down is very important, because all that does is open up the property,” he said. “Thalhimer is talking to a lot of tenants … and what some are saying is, ‘Knock down that flyover and we’ll talk.’”

The Regal Cinemas would be housed in the two-story, 50,000-square-foot former Macy’s South building fronting Holly Hill Road. The theater chain signed a letter of intent for the Regency space, Hargett said, but a final lease has not been formalized.

Regal is projected to begin operating by March 2019, Hargett said.

Jumpology, which has been in talks with Regency for about a year, would fill the third level of the vacant three-story, 41,000-square-foot Macy’s North building fronting Quioccasin Road in the mall’s next phase of redevelopment, Hargett said.

Plans call for the roof of the Macy’s North building to be raised from 57 feet to 65 feet to accommodate Jumpology. The second level of Macy’s North will be subdivided into retail spaces ranging from 2,066 square feet to 8,246 square feet.

Lidl is leasing the first level of the building for a training center. Hargett said that space will become available for lease once the German-based retailer vacates in a year.

A parking deck in front of the Macy’s North building also would come down in a future phase of development, Hargett said, and be replaced with a 12,300-square-foot retail building.

Other future phases include the construction of a 250- to 300-unit apartment complex on the Regency site near the corner of Starling Drive. Hargett added he also purchased a half-acre lot from J.C. Penney near the intersection of Holly Hill and Parham roads that may include another retail center or restaurant.

Thalhimer and Rebkee’s acquisition of Regency included about 450,000 of the mall’s 820,000 total square feet. The sale did not include buildings occupied by Sears and J.C. Penney, which own their respective stores, comprising 370,000 square feet.

People still go to the movies? That’s a surprise, I figured they’d be fading away like brick and mortar retail with the internet. Well good for Regency and that area, I remember going to the old Regency Cinema that used to be over where Kroger is now.