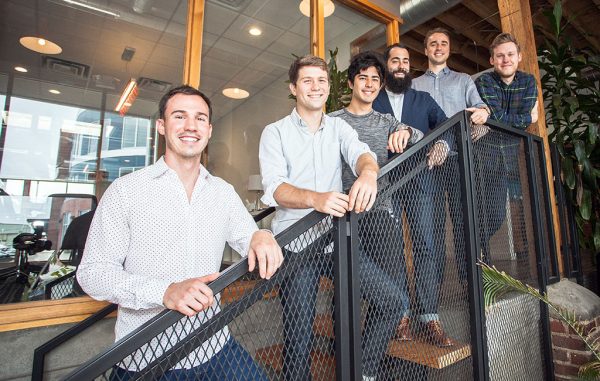 A year and a half after it picked up a local branding shop, a national PR firm is continuing to pull from Richmond’s talent pool.

Minneapolis-based Padilla, which has an office in Richmond’s Manchester district, has acquired INM United, a local software design and development company.

The deal took effect June 1. Terms were not disclosed.

“We were discussing a number of places to get talent, and all of a sudden, INM came to our attention,” Casey said, noting that Padilla had worked with INM on previous projects and shared some clients.

Erb, who started what would become INM in 1998 at the age of 15, said conversations with Padilla began when he approached Mark Raper more than 18 months ago – around the time the PR firm picked up local brand agency Joe Smith, which continues to operate as its own entity under the Padilla umbrella.

It was Raper’s firm, CRT/tanaka, that brought Padilla to Richmond in 2013, when Padilla’s predecessor, Padilla Speer Beardsley, acquired the local PR shop.

Erb said his intention was to discuss collaboration opportunities in areas where the companies’ client base overlapped. He said those talks turned toward merging earlier this year, when he said Padilla saw a need to build their digital capabilities and INM saw a means to broaden its services and reach.

“Over that period of time, we’ve done more work in the health sector and food space, which Padilla has a great amount of expertise in,” Erb said.

“A lot of our clients were asking for services that we did not have, like the branding, marketing, PR,” he said. “The other component was the reach, to go not just outside our region but also have a national and global audience we can go after.”

Erb said INM’s existing contracts with clients will come with them to Padilla. The firm has designed and developed web software and mobile apps for national brands such as AOL, BFGoodrich and Walmart, as well as local clients such as Allianz, Health Warrior and Luck Companies.

Erb said INM’s annual revenue exceeded $1 million last year and was on a comparable track this year. Previously based downtown, the company moved to Scott’s Addition in 2014 to make way for Quirk Hotel.

The addition of the INM team brings Padilla’s local employee count to 52. The company, which recently swept the best-in-show awards at this year’s Virginia Public Relations Awards, employs a total of 240, with offices in Chicago, Los Angeles, Minneapolis, New York, San Francisco and Washington, D.C.

At Padilla, Erb’s title will change from president/CEO to senior director of digital growth. While he plans to continue what he started with INM, including side ventures he started such as mobile app SpotTrot, Erb said he will now do so under his new company’s umbrella.

Casey said the addition of Erb and INM will help Padilla keep pace with an always-evolving digital environment.

“Digital is a fast-changing world, so agencies that are committed to really having a strong digital platform and capability really need to be vigilant, to make sure that they’re really on top of the changing nature of digital,” she said. “Joel’s team has a couple of arrows in their quiver that we don’t have currently.”