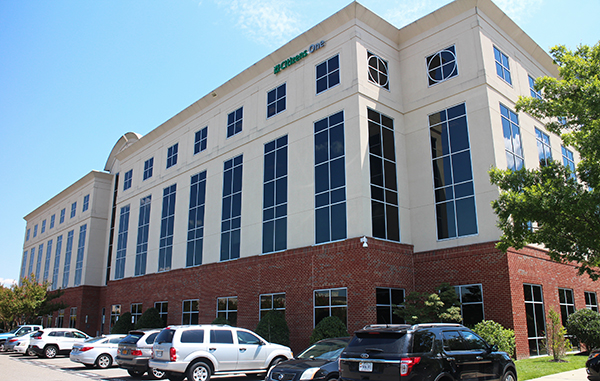 Citizens Bank anchors the two-building complex at 10561 and 10571 Telegraph Road.

The noteholder of the loan held on the two-building, 163,000-square-foot complex at 10561 and 10571 Telegraph Road is pursuing foreclosure, according to a report from Trepp, a commercial real estate loan-tracking firm.

The borrower and owner of the buildings is an affiliate of San Diego-based Westcore Properties, which purchased the site in 2008 for $22.5 million.

The loan, originated in December 2006 and packaged as a commercial mortgage backed security, has a $16.6 million balance, according to Trepp. It had a term of 10 years and had a balloon payment due upon maturity.

The loan matured on Jan. 11, according to Trepp, and it was transferred to special servicer on Jan. 13 due to a maturity default. Trepp records show the noteholder previously had been in workout discussions with the borrower.

“The servicer has commenced its exercise of rights and remedies and is pursuing foreclosure,” the Trepp report states.

Messages left for Westcore executives were not returned by press time.

Wells Fargo is the master servicer of the loan. CWCapital Asset Management is the special servicer, which handles troubled loans.

Despite the defaulted loan, the complex’s occupancy was healthy, at 97 percent as of April, Trepp found.

Pennsylvania-based Citizens Bank is the anchor tenant, occupying the bulk of the larger building with more than 600 employees. Its lease expires in 2019.

Citizens Bank did not respond to a request for comment about its future office space needs in the Richmond market.

The complex was built in 2001 and sits on about 13 acres. The two building most recently were assessed by Henrico County at a combined $18.4 million.