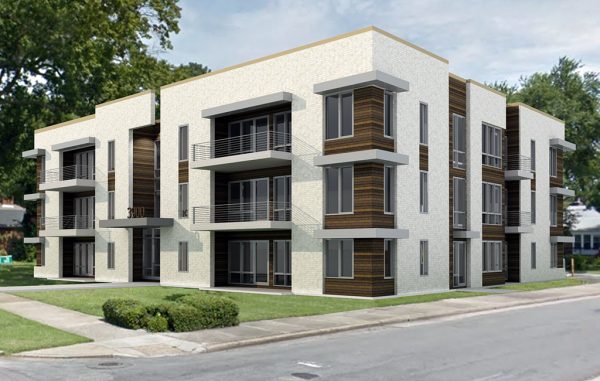 Yogi Singh and his crew are developing an appetite for old Richmond office buildings.

In the midst of its Summit Suites project in Scott’s Addition, the group of real estate investors is moving forward with plans to raze an L-shaped medical office building at 3900 Monument Ave. and construct a three-story, 15-unit apartment complex in its place.

They bought the nearly 60-year-old 3,700-square-foot property, which is now vacant, in December for $605,000. They were attracted to building’s location at the corner of Monument and Kent avenues and by its existing zoning, which allows up to 15 apartments.

“We liked the opportunity to get what we thought was attractive density by right, right at the corner of Monument Avenue,” Singh said.

They’ll build a 20,000-square-foot structure on the half-acre site, with five apartments on each of the three floors. The apartments all will be roughly 1,100 square feet with two bedrooms and two bathrooms.

The project is budgeted at under $5 million and is being financed by First National Bank, which recently established a commercial lending presence in Richmond through its acquisition of Yadkin Financial.

The project’s development plan was approved in March. It now awaits demolition and building-permit approvals from the city, and completion is expected in the first half of 2018.

KBS is the general contractor, Johannas Design Group is the architect and SilverCore is the site engineer. Williams Mullen’s Jonathan Frank helped the developers with legal work.

It’s the first ground-up apartment project for Singh and his group, who are underway on renovations at the first building of their Summit Suites office rehab at 3122 W. Marshall St.

That project may include redevelopment of two neighboring 70s-era office buildings, or potentially selling off the properties and their adjoining parking lots – capitalizing on investor interest in Scott’s Addition.

I met Yogi when he first emerged from VCU Real Estate School and I could tell he was a young man with a lot of ambition. His time with Capital Square was well spent, learning from one of the best investors in the business. It’ll be interesting to see the results of his first ground up building.