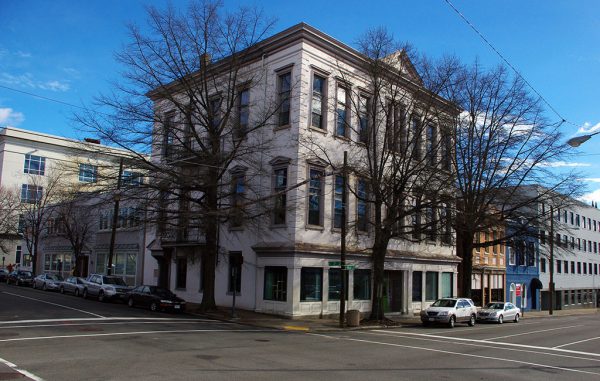 The building at 300 E. Main St. will be converted into commercial space and 10 apartments. (Michael Blount)

A downtown office property is getting repurposed at the hands of two brothers.

Michael and Al Blount are redeveloping the three-story, 10,000-square-foot building at 300 E. Main St. into a mixed-use commercial and residential structure.

Plans call for the building’s ground floor to house 3,200 square feet of commercial space and 10 apartments on the floors above.

“We think it’s a great location,” Michael Blount said. “For years, people were moving out of the city, and out of downtown … now you have the reverse affect happening. Purchasing the building and redeveloping it for this purpose makes sense now.”

The brothers, raised in the Richmond area, purchased the structure in 2015 for $770,000, according to city tax records.

It’s their second project in that part of downtown. In 2013, they completed work on a nine-unit row house project at nearby 6 N. First St., across from the downtown Richmond Public Library branch.

The Blounts hope to complete the project by yearend. Richmond-based Trent Construction is the general contractor overseeing the renovation, and Commonwealth Architects did the design work. 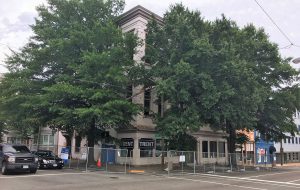 Michael said the building was constructed in 1869 by a chapter of the Freemasons to serve as a lodge. Eventually, the second and third floors became a spot for parties and events, while the ground floor served as a drugstore and candy shop through the mid-1900s.

By the 1940s, Michael said, the building was converted into office space, which remained its primary use until he and Al purchased it two years ago.

Michael said much of the wood used in the 1940s drop ceiling is being repurposed into flooring in future apartments and for a second staircase. He said the large windows also will stay in place – opening up the apartment space with more light. The project is eligible for historic tax credits.

At least two other projects are in the works in the neighborhood.

On the same block as St. Albans Lofts, Virginia Workers’ Compensation Commission is planning to move its headquarters from 1000 DMV Drive to the former Media General building at 333 E. Franklin St.

About five blocks west, construction is underway on a three-story, 4,000-square-foot duplex at 305 W. Grace St. – a narrow, 0.08-acre lot between an isolated 1900-era rowhouse and the Davis Market parking lot at Grace and North Madison streets.

Along with the planned apartment usage, it would be nice to see how these developers addressed the parking needs of newly renovated apartments and offices.

And to think, I knew the brothers Blount back when! I’m glad to see them still moving forward, and they’ve purchased a beaut of a building. I believe Colliers Scott White had a role in that purchase. As to Matts comment above, it’s not about parking anymore at the city level, though it remains a concern with the lenders. The lenders have less faith in emerging demographic trends and less faith in the development of mass transit than the city leaders. It’ll be interesting to see who is correct, but it’s time to build on all of these parking lots.… Read more »

Looks like an appropriate re-purposing of a graceful old building. It is great example of how state and federal tax credit programs make a significant positive impact on our community. I look forward to seeing this project come together.

It was 1980 when I brokered the sale of St. Albans to Alex Alexander. My first investment sale. Except for the pigeons, the property was vacant. The original hand-formed plaster moldings were just about gone as was the property’s former glory. Alex saved the property. Thanks to the Blounts for continuing the property’s improvement and reinvention. Best wishes for success.