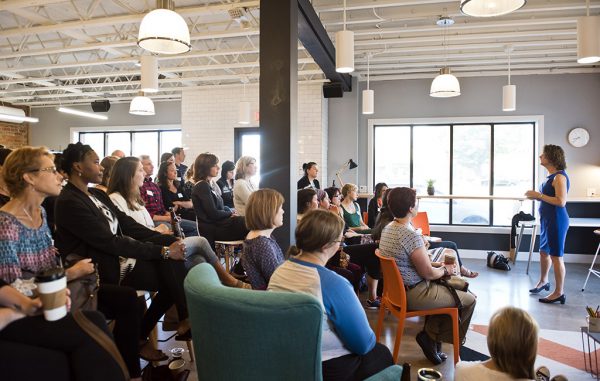 A Richmond-based morning lecture series has branched out westward.

Mindful Mornings, a series of free forums featuring networking and keynote speakers, launched locally in early 2017 and recently held its first event outside Richmond in Charlottesville.

Founder Becky Crump said the venture has held five forums in Richmond. Speakers’ topics have run the gamut with one common denominator:

“Topics have ranged from community health, to social entrepreneurship, to food access, to personal health. The content is just always about social good,” Crump said.

As for the audience, Crump said she wants Mindful Mornings to be inclusive as well.

“This group (of people) is tough to define because it’s defined by something incredibly broad. It’s a community of people who are driven, at a very core level, to give back,” she said.

Crump is a VCU alum and getting her master’s degree in integrative health from Maryland University of Integrative Health. She works full time doing business development and marketing at cellphone repair service GlassSmith with her husband Blue Crump, and has worked in marketing for Ellwood Thompson’s and The Frontier Project.

While at The Frontier Project, she encountered CreativeMornings, a national morning forum series, which spawned a Richmond chapter two years ago and inspired her to start Mindful Mornings.

“I saw that there’s a market for people who want to run meetings with others. But I don’t think of myself in competition with them,” Crump said. “I consider it a different mission and message, which targets a different group and has a different format.” 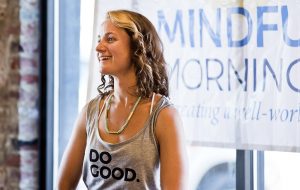 From the first forum to the fifth, attendance at Mindful Mornings has jumped from 15 to 65. Crump said after June’s forum filled up in 14 hours, she’s planning to find a new Richmond location to accommodate more people. The series was previously held at the Gather building at 2920 W. Broad St.

The forums last about 75 minutes and take place every six weeks. Crump said while she’s still finding ways to grow the business and expand to other markets, there are two things she won’t budge on.

“I’ll never announce who the speakers will be before the event, and I’ll never charge people to come,” she said.

The first half of the forums is open for networking over coffee and snacks, with the back half set for the speaker.

Crump said she’s kept costs down by having the space, food and coffee donated, with three volunteers organizing.

She said operational costs include legal counsel and website development as the biggest expenses. The for-profit organization earns money through merchandising, with sponsorship, membership options and annual summits planned for the future.

With her first forum in Charlottesville on the books, Crump said she’s in talks to start chapters in Point Pleasant, New Jersey and Asheville, North Carolina soon, with her eye on Williamsburg and Virginia Beach for further expansion later in the summer.