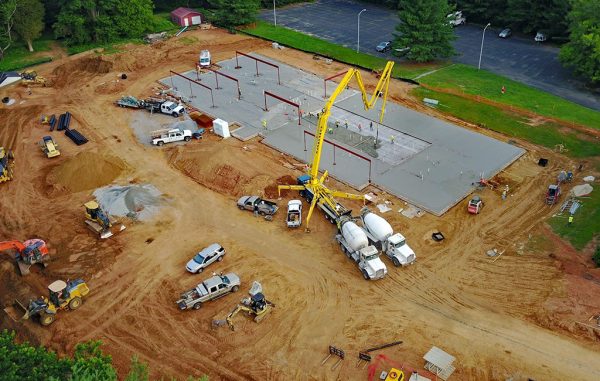 Foundation has been laid for the clinic’s new building, set to open in early 2018. (GFCFS)

A local nonprofit has capped a seven-figure fundraising effort that began a little more than a year ago.

The Goochland Free Clinic & Family Services announced Wednesday it reached its capital campaign goal of $7.1 million, which will fund its new 20,000-square-foot facility at 3001 River Road West. The nonprofit also will set aside $1.5 million of that total as an endowment.

Executive Director Sally Graham said the organization initially projected completing the campaign toward the end of this year. It began in April 2016.

“We are truly amazed that we’ve been this successful in such a timely manner,” Graham said. “We thought we’d need more time to raise the goal amount.”

The effort was titled the All.Here.Now capital campaign, with Lisa Luck serving as campaign chair.

GFCFS finance director Mirriam Oman said family funds/foundations and individual gifts accounted for most of the fundraising, with corporate and nonprofit donations pitching in 5 percent of the goal.

The group had a few big boosts along the way. In May, GFCFS received a $400,000 challenge grant from the Mary Morton Parsons Foundation, and previously has received $500,000 grants from the Cabell Foundation and Harrison Foundation.

Founded in 2007, GFCFS provides healthcare, shelter, food, financial assistance, mental health and domestic violence services to Goochland residents. It has operated out of three separate locations nearby the new facility, including the basement of the old Goochland High School.

The new building will consolidate all its services into one place, and convert its family services building into an emergency shelter. It broke ground in March and is on schedule to open in early 2018.

“People here really own their community and feel an obligation and responsibility to their neighbors. It’s the buzz of Goochland,” Graham said.