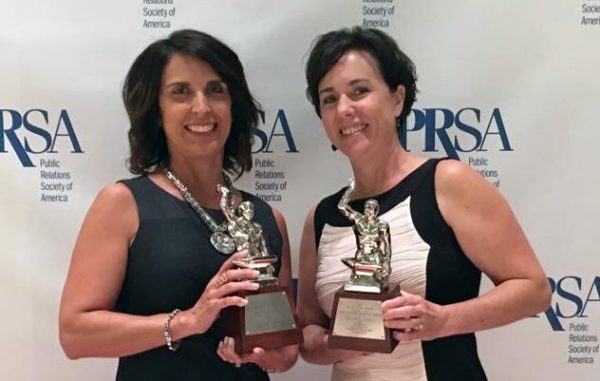 Virginia Lottery’s Jill Vaughan, left, and Jennifer Mullen with the Silver Anvils the lottery won for its work with Padilla.

Virginia Lottery and Padilla received two Silver Anvils at this year’s Public Relations Society of America awards event in New York City. The awards recognized the lottery’s Thank a Teacher campaign, which encouraged the public to send thank-you notes to K-12 school teachers while highlighting that all lottery profits support K-12 education. The lottery and Padilla previously won 12 trophies at the Virginia Public Relations Awards, including a best-in-show for the “Virginia Lottery ‘Smooves’ into New Headquarters” campaign.

VCU School of Business held a student competition to produce a promotional video for its marketing department. Students competed in a proposal competition for a chance to create a 30-to-60-second video showcasing the department from their perspectives. Teams of three developed themes, objectives, storyboards and strategies, and finalists presented a 10-minute proposal to a panel of judges consisting of university staff, marketing department and Brandcenter faculty, and an outside marketing professional.

The winning team included Jacob Belvin and Sydney Weise, who graduated this spring, and Wilson Tolbert, who is slated to graduate in 2018. The team created the video with Dan Brazda, video production manager for VCU University Relations. The project was funded through the School of Business’ EPIC initiative and inspired a new internship class that will be offered to marketing students this fall.

Virginia International Raceway extended its engagement with Planet Central to provide marketing and media support for the raceway’s three major events in 2017. The agency has served as a marketing partner to VIR since 2015 and deploys a mix of digital and traditional media.