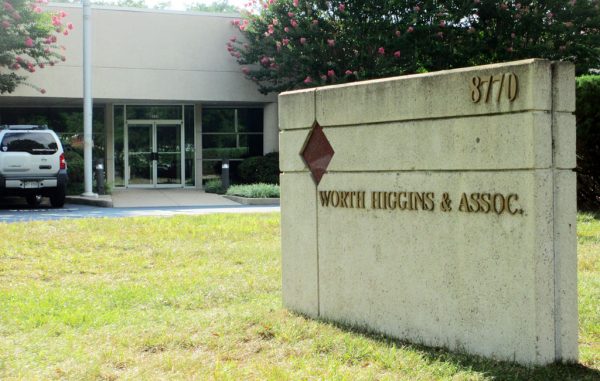 Worth Higgins and Associates is headquartered at 8770 Park Central Drive. (Jonathan Spiers)

After a 55-year run, a local printing and engraving shop has joined forces with a slightly younger and growing commercial printer.

Stern’s Printing and Engraving Co. is now part of Worth Higgins & Associates, which purchased Stern’s in late May for an undisclosed amount.

The acquisition added four employees to Worth Higgins’ 165-person staff and is expected to generate an additional $2 million in annual sales. Worth Higgins currently brings in $26 million in revenue annually, president and COO Benny Bowman said.

Bowman said Stern’s was brought to Worth Higgins’ attention by Steve Howell of Goochland-based Windward Advisors, which was engaged by Stern’s and handled the transaction. Howell said the sale allowed one of Stern’s’ three principals to retire, while the other two, including Stern’s president Ben Harper, are continuing the company as a division of Worth Higgins.

Bowman said Stern’s was an easy deal to negotiate because it didn’t own any equipment, instead outsourcing its sales to various vendors.

“When we looked at the mix of business they had, a lot of it could come into our facility, which we had the capacity for,” Bowman said. “So we could generate a couple million dollars’ worth of revenue that fit the equipment we already had.”

Bowman and Howell had connected through the Richmond chapter of the Association for Corporate Growth, which Bowman said he was encouraged to join after completing Worth Higgins’ first acquisition, Vienna-based Billet Printing, in 2009. The company has made several acquisitions since, including Richmond-based Page Stationery and Petree Press in Sterling, where Worth Higgins maintains a location.

Bowman said the company is open to more acquisitions as it looks to continue to grow.

“What we’ve learned through these acquisition processes is that to be successful, we have to be sure the culture of the company that we’re purchasing is a good fit to our own,” Bowman said. “We’re looking for opportunities regularly and investigate those opportunities from a financial standpoint and really examining the culture, and if it makes sense, we’ll do it.”

Founded in 1970, Worth Higgins touts itself as the largest sheet-fed commercial printer in Virginia, with services that include conventional print, digital printing, letterpress printing and promotional products. Work has included the showbook for the Advertising Club of Richmond’s annual Richmond Show, American University’s annual report, and a cube-shaped promotional item for Genworth.

The company is headquartered at 8770 Park Central Drive, off East Parham Road west of Brook Road.

Farther north along Brook, fellow printer and copier Cobb Technologies moved its headquarters last year to a facility near Virginia Center Commons. Other local competitors include downtown-based printer Bizport, Manchester-based Keith Fabry, and Printing Services Inc., which made its own local acquisition in 2015.