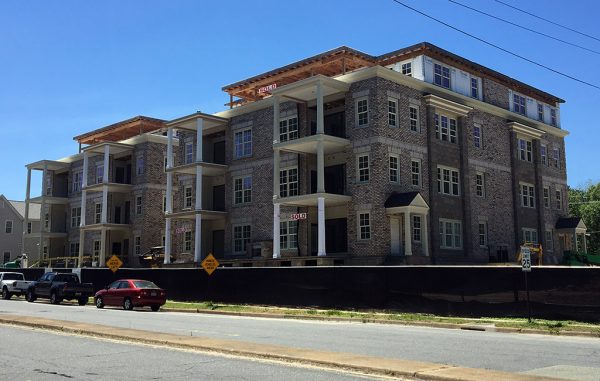 Two months after opening its first finished unit, the legal wrangling surrounding a long-troubled West End condo project is continuing with a fresh round of lawsuits.

Three of the four original partners on The Tiber, a high-end development at Libbie and Guthrie avenues, have filed separate lawsuits against defendants including current owners John George and David Posner, alleging the pair conspired against them to wrest away control of the project.

The three lawsuits were filed on behalf of Scott Boyers, W. Berkeley Fergusson and Jennifer Fergusson, local real estate agents and developers who originally partnered with George on the 15-unit condo project, which stalled out for years after an internal dispute resulted in construction delays and multiple lawsuits between them.

The suits were filed July 19 in Richmond Circuit Court. They allege breach of contract, conspiracy, and tortious interference and each seek upwards of $10 million in damage awards and judgments.

George was the fourth original partner in The Tiber and served as its initial general contractor. A falling out between the partners led to a strategic play in which George enlisted Posner, a local businessman and investor, to help him purchase the $6.27 million loan on the Tiber property.

That leverage allowed them to push for foreclosure on the dormant property, which resulted in a Chapter 11 bankruptcy filing by the development group and, ultimately, an auction process in which George and Posner prevailed and took ownership of the property.

Reached by phone Tuesday, George provided a written response to the suits, calling them “feeble attempts by my former partners to blame others for their own incredibly bad business decisions.”

Courtney Moates Paulk, an attorney with Hirschler Fleischer who represents Libbie Guthrie and was listed among those to be served with the suits, also provided a written response Tuesday.

“Libbie Guthrie’s purchase of The Tiber was conducted with full disclosure and approval of the Bankruptcy Court,” Paulk said in her statement.

“Libbie Guthrie and its members view these suits as frivolous and without merit. They have acted in good faith and within their rights under the law. We intend to aggressively defend the lawsuits. (Libbie Guthrie) will continue to focus on completion of The Tiber.”

Boyers and the Fergussons are represented by Michael Montgomery with downtown law firm Eckert Seamans Cherin & Mellott. He did not return a phone call seeking comment Tuesday.

The lawsuits allege that Libbie Guthrie conspired with Middleburg Bank to prevent the original development group from entering into a contract to extend the loan on the property, resulting in lost profits, expenses and damage to the plaintiffs’ reputations and relationships with Middleburg Bank and other lenders.

The suits further allege that Middleburg Bank breached its contractual obligations with Boyers and the Fergussons and acted in bad faith by cutting off communications with them over the course of their dispute with George while coordinating with Libbie Guthrie on the sale of the loan.

The suits demand a jury trial and seek a judgment on a conspiracy allegation of $6 million – three times the $2 million in damages each plaintiff alleges in regard to that charge. The suits also seek millions more in compensatory and punitive damage awards.

In May, Posner and George opened the model unit for The Tiber, two years after the project’s planned 2015 completion. An agents-only happy hour event boasted three condos under contract, including one of its penthouses.

The Tiber’s condos range from 2,000 to 3,500 square feet, with prices ranging from $675,000 to $1.5 million. The project includes a neighboring 2,800-square-foot single-family cottage. George’s wife, Page George, an agent with Engel & Volkers, is handling the listing and sales of the units.