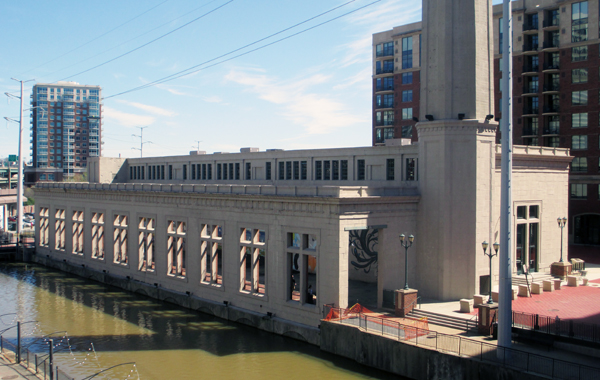 A Baltimore-based developer is trying its hand, again, at filling or unloading a notable canal-front property.

Cordish Cos. has relisted the Haxall Canal hydro plant building at 1201 Haxall Point downtown for sale or lease.

The company enlisted new-to-Richmond brokerage Statewide Commercial to market the property, which has been on and off the market for three years with other brokerages.

Statewide founder and CEO Jamie Clark said a listing price has not been finalized. The site, which includes more than 6,500 square feet of covered canopy space fronting the canal and a 19,000-square-foot building, most recently was assessed by the city at $2.3 million.

The 120-year-old property was once used to generate electricity for Virginia Electric and Power Co., before it was shut down in the 1950s. Apart from occasional events and colorful murals added in recent years, the building has remained mostly dormant in the decades since.

Cordish purchased property in 2000 as part of its $86 million mixed-use Riverside on the James development along the canal. That project, which Cordish has since sold to Herndon-based American Real Estate Partners, included more than 240,000 square feet of condominium office and residential space at 1001-1101 Haxall Point.

American Real Estate Partners listed Riverside on the James for sale last spring, but has since taken it off the market, according to the company.

The hydro plant is Statewide’s first sizable listing in Richmond since it established offices in the market earlier this year. It also is taking over leasing for Cordish’s Power Plant retail development in Hampton.

Clark said there are plenty of options for uses of the property because of its location.

“When it comes to the canal, there’s no place like it, so the goal is to bring a tenant that can appeal to visitors and residents in the area,” he said.

He added that targeting nearby residents and visitors is a priority because of parking limitations.

“We think the location would be ideal for a health or fitness concept, like a gym or fitness studio,” Clark said. “Something where a person can walk over, work out, shower, grab a smoothie and go.”

There’s also the potential to add a second floor, given the structure’s 35-foot ceiling, he said.

Dell Claiborne, who oversees Statewide’s Richmond operation, said the space is well suited for entertainment options, such as a brewery or bar-arcade.

“Casa del Barco has done a great job down there, and something along the lines of entertainment would be a good fit for that area.”

Clark and Claiborne recognize the location could be a hard sell, but both pointed to encouraging activity in the immediate area.

The number of full-time workers along the canal is set to increase after Richmond-based Envera Health in March announced plans to occupy 27,000 square feet of office space in the Riverside on the James building.

CarMax also has grown its workforce in the nearby Lady Byrd Hat factory building at 140 Virginia St., and Fountainhead Properties continues to add to its Locks apartment development, which may include plans for a multi-story hotel.

“There’s this push for reinvestment in that area,” Clark said. “It’s all about finding the right tenant or buyer that’s going to share in the area’s continued growth.”

The article points out the trouble with this building, the parking. However, I do hope that a buyer can be found to transform the vacant part of this building. But keep the murals!

Please consider the increasing number of residents, twenty hotels in a mile radius, downtown workers and visitors to the canal walk-Brown’s Island-bike trail attractions…NONE of these people are in need of parking…They’re already there…no need to plan for imaginary people who may or may not come…locals are ready to support a walkable neighborhood.