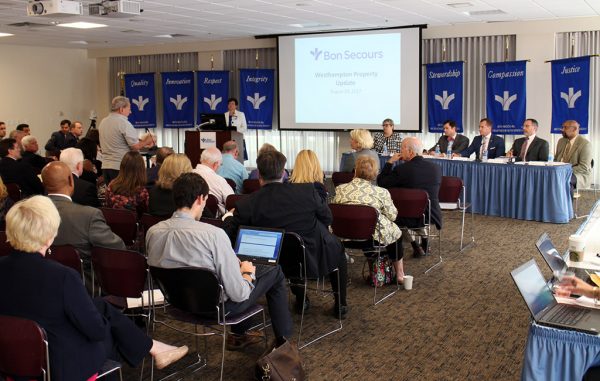 In lieu of razing a dormant 100-year-old school in the West End, a local healthcare giant said Thursday it will let the property stand for now, while allowing developers to propose ideas for the site and building office space on an adjacent plot.

Bon Secours announced its fourth iteration of plans for the Westhampton School site at 5800 Patterson Ave., which it has leased from the city since 2012 as part of a deal tied to the Redskins’ training camp facility.

The existing school structure – two connected buildings originally slated to be redeveloped as the hospital’s nursing college – will remain in the near term. At a Thursday press conference, Bon Secours CEO Toni Ardabell said the organization will listen to proposals from the private sector for the future redevelopment of the school complex.

“We will give priority to any partner who can save at least the most historically significant part of the school,” Ardabell said, referring to the building that stands at the corner of Patterson and Libbie Ave.

The announcement comes after several changes of course for the debated site. In the first of two shifts last year, Bon Secours said it would need to demolish the school’s western building to make way for its nursing college.

Late last year it scrapped plans for a new nursing school and instead sought to build a medical office building that called for demolition of both school properties.

Rhodes Ritenour, Bon Secours’ vice president of external affairs, said there was “no practical way to convert the school to the medical office building that we needed.

“Our goal is to put the highest and best use at the corner of Patterson and Libbie Avenue,” he said. 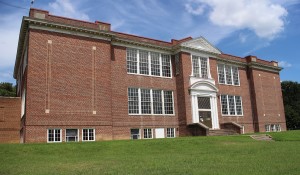 Bon Secours’ board has approved the newest office development north of the school buildings. Ardabell, who took over as CEO in 2016, said Bon Secours will file to rezone the Westhampton site for mixed-use business. The 6.5-acre, city-owned site currently is zoned for residential.

Baskervill has been tapped as the architect of the new office building, with no general contractor yet selected. Ardabell said the cost for that project has not been determined, though construction is targeted to begin by March 2019 and be complete by March 2022.

Future plans for the school will include subleasing the property to another party, with no plans to give up rights to control it.

“This development will ultimately be in line with Bon Secours’ faith-based values,” Ritenour said. “The development will also compliment the healthcare that’s currently being provided on the St. Mary’s hospital campus.”

Bon Secours lease was struck in 2012 as part of Richmond’s efforts to bankroll the Washington Redskins’ training camp behind the Science Museum of Virginia. Bon Secours paid for naming rights on the camp in exchange for a 60-year lease on the Westhampton site at $5,000 a year.

The site most recently was assessed by the city at $9.3 million.

City Councilman Andreas Addison, who represents the 1st District which includes Westhampton, said he was given notice about this project in November before he was elected.

“Throughout my campaign, one of the things I was told by most people at their doorsteps was, be careful with this project,” Addison said.

A Q&A session followed the announcement, during which there was a common theme in the concerns of locals: parking and traffic.

“If you’ve driven those Libbie/Grove/Patterson areas recently, you know the traffic is a nightmare and parking is a nightmare,” one citizen said from the dais, also requesting a traffic study by the city before the project moves forward.

In regard to more development in the area, another local said, “We need that like a hole in the head. That’s going to mean more traffic, more cars, and increase the problems.”

Ritenour offered reassurance that Bon Secours has accounted for plenty of parking in its schematics.