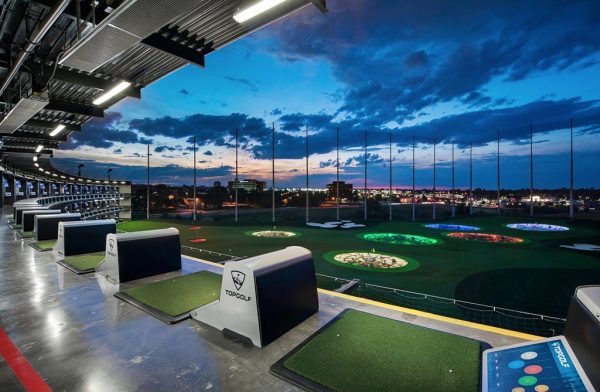 An example of a Topgolf tee line and outfield, this one in Centennial, Colorado.
(PRNewsFoto/Topgolf)

Apparently unfazed by its main rival having already secured land near Short Pump, a fast-growing developer of high-tech driving ranges is not giving up on the Richmond market.

Dallas-based Topgolf said this week it is “actively pursuing a location in the heart of Henrico County,” according to a press release.

It would not comment further on an exact location or the status of plans in Henrico, only to say it’s still early in the process and is likely another 18 months before it would open here.

“As both the capital and the third-largest metro area in Virginia, we have had our sight set on the fast-growing Richmond community for quite some time,” chief development officer Chris Callaway said in a prepared statement. “We hope to offer Richmond residents and tourists an exciting new destination for entertainment.” 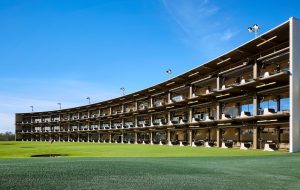 Topgolf venues typically require 10-15 acres and comprise 65,000 square feet. Most are three levels and include 102 hitting bays that can host up to six players at a time.

Customers tee off from the climate-controlled bays that include TVs and tables for drinks and snacks. They smack balls fitted with computer chips to track where each shot lands, letting friends compete against each other in games scored like darts. Topgolf charges for each bay by the hour – between $25 and $45 depending on the time of day.

It has been looking for sites around Richmond since at least early 2016, when it confirmed it had the local market on its list for potential expansion.

The firm may have to play catchup to its largest competitor, New York-based Drive Shack, which is in the early stages of its own national expansion of similar facilities, including one in the works in Goochland County just west of Short Pump. 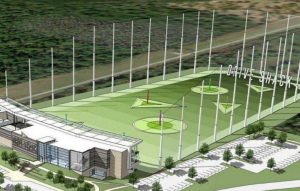 Drive Shack won county approval last month to rezone 13 acres of land along Route 288 and Interstate 64, just off West Broad Street, where it plans to build a 60,000-square-foot, $25 million development with 90 driving bays stacked on three levels. Its plans also include a restaurant, shop and lounge, and room for meetings and events.

The land is owned by the Pruitt family and sits next to the future Page Audi dealership, which is under construction along West Broad Street.

A push into Henrico by Topgolf means the company either thinks the region can support two such facilities or intends to beat Drive Shack to the punch by opening here first, by outcompeting it or scaring its rival out of its plans.

Topgolf is no stranger to Virginia. The company’s first ever location opened in Alexandria and it has since opened two additional outposts in the commonwealth – in Virginia Beach and Loudoun County.

It now has 33 facilities open nationwide and in the U.K., and another 16 locations in the works in the U.S., Mexico and Canada.

Drive Shack initially was backed by Newcastle Investment and golf gear brand TaylorMade. Newcastle late last year rebranded into Drive Shack Inc., through which it runs the driving ranges of the same name and its American Golf subsidiary, which owns more than 80 golf courses.

It’s interesting. Golf rounds are down, courses are declaring bankruptcy or changing ownership, yet two companies plan to build mega driving ranges. Why?

My interpretation from the article is that this is supposed to be a similar experience to shooting pool or going bowling with your buddies (six-person private booths, trackers on balls to play “darts”, they didn’t mention beer, but I bet they have beer and food). This may not be the place for people who want to work on their game, but rather have a fun night out with friends. Not saying it’s going to work, I just think they have slightly more to offer than a traditional driving range. More entertainment than practice

I agree with what CM said. It is more of an entertainment facility than a golf facility. They do have a lively bar area and quality food. I have been to a couple and they have been packed.

So while golf rounds may be down, I think actual participation in golf in its various capacities (driving ranges, etc.) is doing fine.