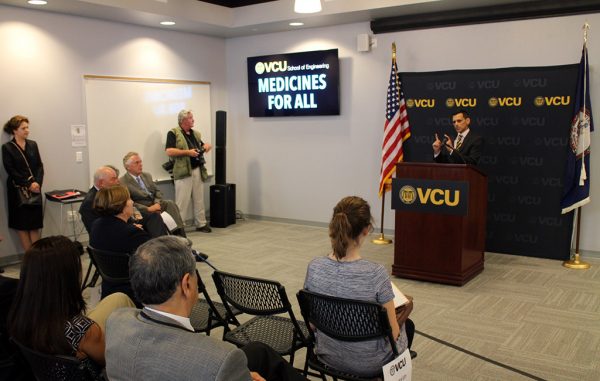 VCU is starting the school year with a bang.

On the first day of classes for the fall semester, administrators announced the VCU School of Engineering has been awarded a $25 million grant from the Bill & Melinda Gates Foundation – the largest grant in the engineering school’s history and the university’s second-largest.

The grant will be used to further establish the school’s Medicines for All Institute, formed in 2014 to reduce costs of manufacturing pharmaceutical products and increase global access to medications.

The institute is led by Frank Gupton, professor and chairman of the school’s department of chemical and life science engineering. Gupton was among several speakers at Thursday’s announcement, including Gov. Terry McAuliffe, VCU President Michael Rao and Barbara Boyan, dean of the school.

“I think everyone understands the challenge that we’re faced with as far as addressing this issue of access to affordable healthcare,” Gupton said.

“We’re not just here to solve healthcare problems,” he said. “We’re here to train the scientists of the 21st century.”

The Gates Foundation previously has awarded nearly $15 million to Medicines for All, facilitating its development of a model that reduces the cost of manufacturing AIDS treatments, among other efforts.

Gupton, who leads a team of about 25 researchers, said Medicines for All has attracted four pharmaceutical companies that want to co-locate with the institute in Biotech Eight, a 76,000-square-foot building in the Virginia Biotechnology Research Park that formerly served as the headquarters for defunct lab testing company Health Diagnostic Laboratory. 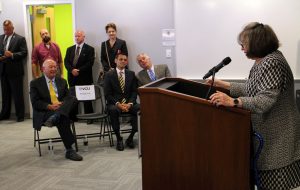 Gupton would not disclose the names of those companies, saying only that the institute is working hard to make those co-locations happen.

“From an economic development perspective, we see this as a technology hub that’s going to start to draw pharmaceutical companies in,” he said.

Meanwhile, VCU’s School of Business also started off the school year with something new: the launch of its first online MBA program.

The two-year, part-time program starts today with an inaugural class of 24 students. Interim dean Ken Kahn, who is teaching a course in the program on creativity and innovation, said the program is meant to reach students who cannot enroll in the school’s conventional evening program, which this year welcomed 50 new students and totals 176.

“Certainly there’s a lot of interest in moving things to a different modality, specifically online. We felt it would be a good way of connecting with people that can’t participate in a traditional MBA program,” Kahn said.

“Some people will think about an online program: You never see anybody. Well, we force you to see your peers and to develop” resources and relationships, Kahn said. “The intent is really to have a community feel, but to deliver it in an online setting.”

The program has been in development 18 months and represents a $100,000 investment, Kahn said. Costs included equipment, additional staffing and facilities, including the renovation of a room into a video production and recording studio.

Videos produced in the studio provide lectures to students who can view them remotely, with lessons taught by instructors in the school. Kahn said the program, led by MBA Program Manager Robert Clarkson, is laying a foundation for other online program offerings and “flip classes,” in which students view a lecture at home so they can engage more in the classroom.

“Doing this online MBA will really help us to set up an infrastructure where we can do some other online programming,” he said. “We’ve taught courses online before, but the fact that we have a whole degree program now online, that’s what’s remarkable for us.”

The on-line MBA program is a huge step forward to open up VCU’s tremendous school of business to more people and amplify its national reputation as an excellence program; it recently received a top 10 ranking as a global executive MBA program by CEO Magazine. Congratulations to Ken, VJ and their associates. The excellence of the engineering school has helped Richmond grow and be recognized on a national stage. It is great to see the Bill & Melinda Gates Foundation recognize its past success and future contributions with a sizable donation. Congratulations to Barbara Boyan and her associates.

Mr. Gupton spoke about 8 weeks ago at my Rotary Club. I was amazed at what was going on at VCU. His work is true cutting edge stuff and could have major world impact. The public/private partnerships could have a large impact on VCU and Richmond. Well done!