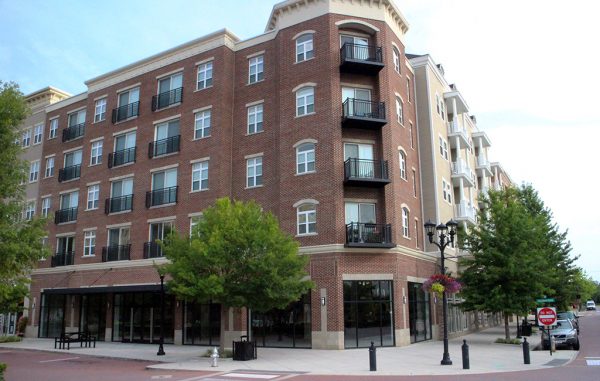 After catching on downtown and in Scott’s Addition, the coworking trend is spreading to Short Pump and filling a commercial space that’s been vacant since it was developed nearly a decade ago.

Gather, a local coworking venture that offers shared and private office space on a monthly basis, is set to open a third location early next year at 2400 Old Brick Road in West Broad Village.

At 18,000 square feet and with more than 90 private offices, the new location will be slightly larger than Gather’s Scott’s Addition location, which opened last summer. Its first outpost opened downtown at 409 E. Main St. in 2014.

Pricing for monthly Gather memberships range from $40 for individuals to $1,500 for private office space. Each location includes a kitchen, common areas, private offices and conference rooms, and targets freelancers, startups, nonprofits and out-of-town companies with a presence in the region.

James Crenshaw, a managing partner at Gather, said suburban clients want the same offerings as those in the city and that his group was drawn to West Broad Village for its built-in walkability.

The mixed-use development features restaurants, retail, a 339-unit apartment complex and dozens of townhouses at the site’s western side. 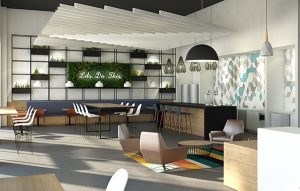 Rendering of the planned space at West Broad Village. (Gather)

“We expect this mix (of clientele) to stay somewhat consistent in Short Pump,” Crenshaw said, adding that Gather is considering more locations in region.

The company’s lease for 18,000 square feet chips away at some of the commercial vacancy that has lingered in the western end of West Broad Village since it was constructed around 2009. The development has more than 400,000 square feet of commercial space, housing the likes of Whole Foods, REI and Dave & Buster’s.

It has 10 retail suites totaling 63,000 square feet available for lease. Some of the commercial spaces, like the one Gather is taking over, have never been filled.

The bulk of West Broad Village is owned and managed by national developer ShopCore, which in its previous incarnation as Excel Trust bought much of the development for $161 million in 2012.

Other new arrivals to West Broad Village include Sea by Thai restaurant, which is taking over the former Kebab & Biryani space. Village Family Dentistry moved into 2448 Old Brick Road, the former home of Organic Nails and Day Spa, which closed in 2014.

Farther west down Broad Street, other developments have seen action as well this summer.

West Broad Marketplace sold in June for $74 million, and many of GreenGate’s commercial tenants have opened, most recently Red Salt Chophouse & Sushi. Earlier in August, 12 acres of developable land across the street from GreenGate sold to an undisclosed buyer.