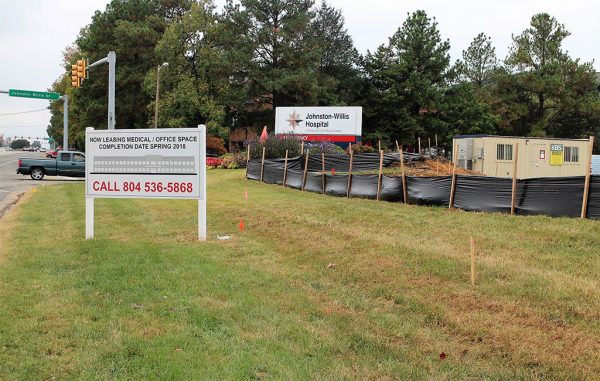 Johnston-Willis Hospital and Emerson Cos. are building the Neuroscience Center of Excellence in Midlothian. (J. Elias O’Neal)

With the bulk of its tenants already in place, earth has begun to move on a local developer’s newest medical office building.

Chester-based Emerson Cos. has begun site work for the 50,000-square-foot Neuroscience Center of Excellence at 1011 Johnston Willis Drive, on the campus of HCA’s Johnston-Willis Hospital.

The development firm, led by George Emerson, bought the 3.75-acre parcel from Johnston-Willis in August for $1.2 million, according to Chesterfield County records.

Emerson Cos. has secured 33,000 square feet in leases – mostly the result of its deal with Johnston-Willis Hospital, as well as the physician practices. About 17,000 square feet is still available for lease.

KBS is the general contractor on the project. Walter Parks is the architect.

Elsewhere in Chesterfield County, George Emerson is involved in at least two large apartment developments: the 385-unit Moore’s Lake Apartments and a 236-unit complex that will bring the first residential rooftops to Westchester Commons.