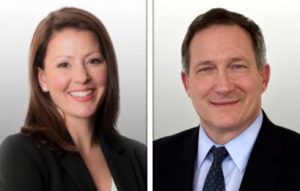 Two Richmond law firms are making moves in the early days of 2018, with one adding new talent from a crosstown rival and another opening a new office in the western part of the state.

O’Hagan Meyer, a firm with roots in Chicago that rebranded and expanded in Richmond in 2016, has increased its headcount downtown by luring over Charles Sipe and Jessica Flage from Goodman Allen Donnelly in Innsbrook. The two new partners started Monday.

It also added associates Quinn Adams, who came over from Hunton & Williams, and Amy Heerink, who worked for former U.S. Congressman David Dreier and will be based in O’Hagan Meyers’ Alexandria office. Adams and Heerink started Jan. 2.

That brings the firm’s headcount to 60, which includes 14 in its Richmond office at 411 E. Franklin St. The firm made its first splash in Richmond in summer 2016 when it added a group of LeClairRyan lawyers, led by Charlie Meyer, whose name was added to the O’Hagan flag.

“It was not a practice area that we had any depth in here in Virginia,” Meyer said of the book of business Sipe and Flage brought over. “They heard about us and reached out to us.”

In addition to Chicago, Richmond and Alexandria, it has offices in Philadelphia, Wilmington, Delaware, Pittsburgh and Washington, D.C. Meyer said the firm will look to continue growing along with its client base, which includes healthcare clients, lawyers, accountants and others.

“There’s a lot of interest and we’re looking for other opportunities to service our clients here in Virginia and the rest of the country,” he said.

Also on the move is West End firm GreeneHurlocker, which this week opened a new office in Harrisonburg.

The outpost will be manned solo for now by Jared Burden, who handles commercial real estate law. Burden spent years at a big firm in San Francisco and in-house for Washington, D.C.-area developers before going solo in Harrisonburg. 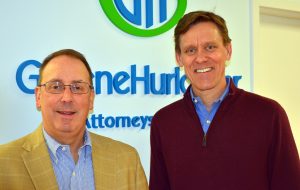 Burden is now a partner of the firm, joining Eric Hurlocker and co-founder Brian Greene.

“Geographically he has a really nice client base in the (Shenandoah) Valley,” Hurlocker said of Burden. “It also provides a really seasoned commercial lawyer who also importantly has a real estate background, which is particularly important to a number of our renewable energy clients.”

The new addition brings the firm’s attorney headcount to six and the move west comes a few years after it relocated its Richmond office from downtown to Libbie Avenue.

Hurlocker said it may look to add a junior associate to the Harrisonburg office, if it performs as expected. And the firm has other expansion plans in mind.

“At the same time we’ve looked on the real estate side; we’re continuing to look for someone that has a litigation/employment book of business,” he said. “The fit is everything at a firm our size. It’s finding the right person as much as the right client base and book of business.”

The additions at O’Hagan Meyer and GreeneHurlocker add to what’s been a busy start to the new year for Richmond law firms. Earlier this month one of the namesakes of DurretteCrump jumped to a downtown rival, bringing a few of his colleagues with him and prompting a rebranding at the firm he left.