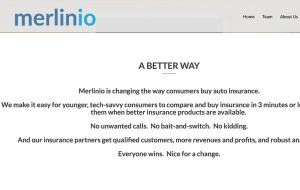 A pair of veteran local entrepreneurs is looking to make shopping for car insurance more like shopping on Amazon – and raising a pile of cash to help them get there.

In February, Jon Ansell and Jammy Li will launch Merlinio, a car insurance aggregator app that allows users to photograph the barcode on the back of their driver’s license and view available plans from over 35 providers.

The aim is for consumers to browse and purchase car insurance in less than three minutes using Merlinio.

“No one’s really trying to simplify the customer experience, no one’s trying to make it like Amazon,” said Ansell, who previously founded local travel insurance company Allianz Global Assistance. “We’re focused on millennials since they’re the community most comfortable with digital tools.”

While Merlinio functions similar to aggregators such as Henrico-based Compare.com or Kayak, Ansell said, it uses data from customers’ licenses to let them know when cheaper plans become available.

“We don’t just want to be getting quotes and sending people off to be insured, we want to be an agency as well, meaning that we not only work to get customers but retain them,” Ansell said. “If they renew and there’s an increase, we’ll shop again.”

Merlinio will be free for consumers, and will earn its money from the insurance companies who pay to be listed.

The service will launch initially in Virginia, Texas and California as it plans a national expansion through 2019.

“We’re raising money for entry into the Texas market and enough runway to what would be a Series A (round) sometime later in 2018,” Ansell said. “We’re halfway through and just started a month ago. We’re encouraged by the support, both local as well as regional.”

The company is headquartered in the West End near the intersection of West Broad and Glenside Drive. Merlinio’s app and online platform are being developed in China. Ansell said the company has about seven employees in various locations nationwide.

This is Ansell’s third startup, having previously started Allianz and Fusion Co. Li was previously chief information officer of Compare.com and another comparison company in China.

While Merlinio is bullish on the millennial insurance market, Ansell said it might expand its offerings beyond car insurance.

“Our ambition is to go national and eventually roll out other things,” he said. “Not to just be car insurance, but any kind of insurance-related products that (millennials) may need, and do it their way.”

Another local startup is taking a tech-based crack at the insurance market. Church Hill-based Pogo launched in December, which aggregates business insurance policies for freelancers and the self-employed.