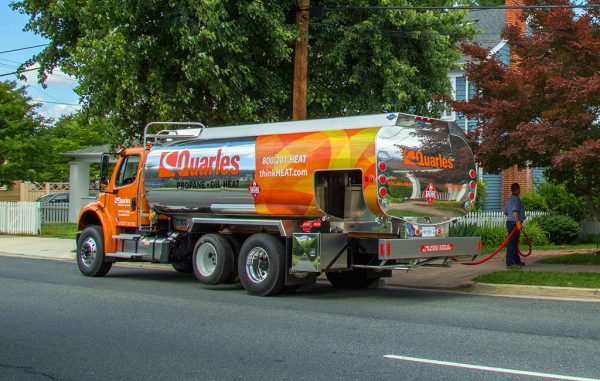 A Quarles tanker and employee during a fueling service. (Quarles)

After a 69-year run, a local fuel company is hanging up the pumps after being purchased by a larger peer.

Quarles, which operates fuel distribution centers across Virginia, will consolidate its Richmond distribution operations at the Colonial Fuel Oil property at 5279 Mechanicsville Turnpike. Colonial Fuel’s five delivery and service employees have been hired by Quarles.

Quarles CEO Paul Giambra said Colonial Fuel was looking to sell as president Art Cassanos reached retirement age. He said Cassanos operated Colonial Fuel for his family, which had owned and run the business the past 41 years.

“They had engaged a business broker out of Atlanta that was the intermediary that discussed the opportunity with I think quite a few local distributors,” Giambra said.

“They had a good customer base servicing in the Richmond market. It was just a good opportunity for us to grow our business down there.”

Cassanos could not be reached for comment Friday. In a statement on Colonial Fuel’s website, he said Quarles matched up well as a purchaser, noting the business is likewise Virginia-based and family-owned.

“After making the decision to retire, our family searched to find another local company whom we feel will be able to meet all of our fueling needs. Quarles Petroleum surfaced as an excellent match to service our customers,” the statement said.

Giambra said the Colonial Fuel brand will switch over to Quarles, which already has a presence in the Richmond market. He said the company’s residential heating, oil and propane delivery operations are centered on Richmond.

The rest of Quarles’ service area consists of fleet operations stretching from Philadelphia to Wilmington, North Carolina. The company, started in 1940, serves about 40,000 customers.

With the Colonial Fuel purchase, Giambra said Quarles picks up its Richmond-area customer base, including a distribution arrangement with Sunoco gas stations. He said Colonial Fuel primarily served residential heating customers and some commercial clients. The acquisition did not include additional retail locations owned by Colonial Fuel.

The deal is the latest acquisition for Quarles, which has purchased other Virginia-based fuel companies in recent years. In 2015, it acquired Culpeper-based Whiting Oil Co. and Northern Neck Oil Co. in Warsaw from Petroleum Marketers Inc.

The acquisition is at least the second Richmond-area fuel company to sell to a larger peer in the last six months. Last summer, Natural Gas Co. of Virginia, doing business as Mr. Able Propane, was purchased by regional provider Revere Gas.