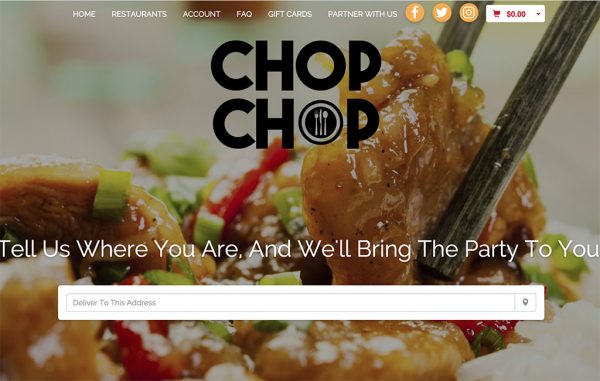 As national brands face off in the local food delivery market, Richmonder Chris Chandler is convinced there’s room for one more competitor.

Chandler next month will launch Chop Chop, an online and app-based food delivery service that with its own fleet of drivers in Richmond will look to grab market share from larger players like UberEats, EatStreet and Grubhub.

The idea for Chop Chop began percolating last year, following Chandler’s stint at OrderUp, a national restaurant delivery brand that entered the Richmond market in early 2016 after being acquired by Groupon. Chandler was general manager for the company’s local operations.

“We basically came into the (Richmond) market with zero restaurants,” Chandler said of his previous employer. “OrderUp was headquartered in Baltimore and Richmond was an expansion.”

About 18 months later, Groupon and Grubhub announced a “strategic partnership” that effectively shut down many of OrderUp’s markets as Grubhub moved in. Chandler, who lost his job as a result, said the doors were shut on OrderUp’s Richmond presence on Sept. 30, 2017. OrderUp’s website now redirects to GrubHub’s.

Since then, Chandler said, the remaining national delivery brands like UberEats have tilted the market in favor of larger chains.

“OrderUp going by the wayside helped Uber come in,” he said. “Uber came in and was charging a high percentage to restaurants. I’ve heard cries from restaurants that there needs to be a better option.”

Chop Chop will charge customers a $4 delivery rate, which will go directly to its drivers. The company will earn its money from contracts with restaurants, taking a percentage of each order through the platform.

Chandler did not disclose that percentage, but said “Uber is charging close to 40 percent more than what we’re charging.” UberEats does not specify the cut it takes from restaurants, but the New York Post reported in 2016 that it was then taking 30 percent of each order.

Chop Chop currently has about 30 restaurants signed on, many of which are locally owned. They include Strawberry Street Cafe, Mean Bird, Red Eye Cookie Co. and many of Chris Tsui’s EAT Restaurant Partners locations like Wong Gonzalez, Foo Dog and Fat Dragon.

Chandler said he wants Chop Chop to use the same approach that brought OrderUp success in its time in Richmond.

“I want to have cheaper rates for restaurants. They don’t have local marketing and representation in these areas,” he said. “When the Watermelon Festival happens, we’ll actually be there marketing for our restaurants in Carytown and help drive business to them.”

Chop Chop will operate from about 11 a.m. to 10 p.m. upon launching, and will have about 60 drivers. It will operate primarily in the city limits, from Glenside Drive to Shockoe Bottom.

“Eventually the plan is to expand and go to the counties, but in order to be effective you need to have a central area,” Chandler said.

An East Carolina University grad, Chandler has spent much of his life working in local restaurants, including the former Europa Italian Cafe, The Tobacco Company and Cha Cha’s Cantina.

He most recently has been working in sales for a transport company, a job he quit three weeks ago to pursue his startup full time.

He said his time in restaurants and sales gives him confidence heading into Chop Chop’s launch, a venture that he’s putting $100,000 into, with help from angel investors.

“It was the perfect training to work for OrderUp,” he said. “To have it taken away was kind of devastating, but this is a fun opportunity to have now.”

Chandler is running the company with two other employees, both of whom are OrderUp alums. He said they’re looking around for office space near the VCU Monroe Park campus.

Chop Chop will have at least one other locally based competitor in Quickness, a longtime bike courier that launched its online platform a year ago. The pedal-powered company has since added Growlers To Go as a client available for local delivery.

At least one other local startup built around the restaurant industry launched in recent months. Duncan Parker’s DineGigs, a food-service management software company and job board, launched in 2017 and wrapped up the year with a $2 million fundraising round.