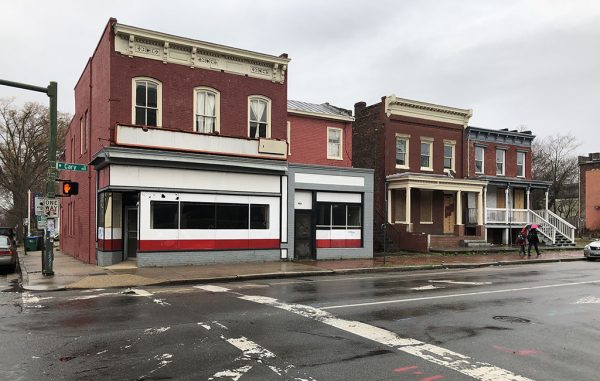 Buildings will be razed to make way for the 805W development on the edge of VCU territory. (J. Elias O’Neal)

A collection of mostly derelict properties along West Cary Street at the edge of VCU territory is slated to meet the wrecking ball as an $18.5 million mixed-use development is in the works to take its place.

A group made up of Kevin O’Leary and James Flanigan, who own J.D. Lewis Construction Management, and local developer Larry Cluff are assembling 13 parcels near the corner of West Cary and South Laurel streets where they’ll build a four-story, 100-unit apartment project.

The 13 parcels encompass about 1 acre for the future project. They include four vacant buildings fronting West Cary Street, along with surface parking lots along South Laurel Street and Green Alley.

“It’s an excellent location,” O’Leary said. “We think the site lends itself to immediate access to downtown and several nearby destinations for future retail tenants and residents.”

Dubbed 805W, the project would include 10,000 square feet of retail on the ground level with parking for residents and future commercial users. The remaining three stories would include a mix of one- and two-bedroom apartments, O’Leary said.

A plan of development has been submitted with the city’s planning division, O’Leary said. Construction is set to begin this spring and will take about a year to complete. 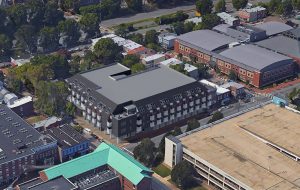 Despite its proximity to VCU, O’Leary said, the project is not designed as a student housing development, although students will be welcome to rent units in the building.

Rents for the units will be market rate.

Average rents for existing one-bedroom apartments in the surrounding area can range from $650 for an older apartment to up to $1,100 for newer units.

“We designed this to be living quarters for anybody that wants to live downtown,” O’Leary said. “The main amenity here is the walkability to restaurants, VCU and the downtown area.”

The third-floor units will include skylight balconies, where the window opens outward creating a roof balcony to maximize the space. The top level of the building also will include a community room where residents can access an outside patio with city views.

O’Leary and his partners are well-versed in infill development that adds density to the city’s core. J.D. Lewis is wrapping up construction on developer Josh Bilder’s Patrick Henry Square in Church Hill, and is building the Goodwyn Flats apartment development in Union Hill. The company also used historic tax credits to redevelop 501-503 E. Main St. downtown into apartments, retail space and the firm’s headquarters.

Out with the old! In with the new! change is the only certainty near VCU.

Increasing density with infill is great, but I’m seeing a trend as Richmond razes more and more of its historic buildings and blocks. Is there no way to incorporate these facades, at the very least? Why does the city care so little about preserving the assets it has that the surrounding counties don’t?

The map above shows that the historic row is a small part of the overall project, so preserving that portion shouldn’t be onerous. Our children and grandchildren will thank you, Misters O’Leary and Flanigan.

The rendering looks bizarre and doesn’t fit in with the neighborhood. In my humble opinion, a terrible waste of space. Hopefully just a ruse by the developer to bring VCU to the table. This could be a very cool corridor anchored by several existing and tasteful redevelopments (Cary Street Gym, Thalhimer Tennis Center, VCU life sciences bld, and the athletic fields).

Destroying structures like this is how Richmond loses its sense of character and authenticity.

Beyond ugly. And not very smart because with historic tax credits and facadism( unfortunately they only need the front walls of the buildings unless that’s been fixed)- they could make a better looking and less expensive project. And even get additional credit for low to moderate income apartment development. And I’m pretty sure this building shown in the drawing will need a special use permit because it’s inappropriate for the zoning. Get ready for Oregon Hill to fight to preserve our historic buildings. We are meeting about it tonight at our neighborhoid association meeting. We had 28 people at our… Read more »

Horrifying architectural choices. Looks like ‘Blade Runner’ meets Eastern Bloc auto plant. People wouldn’t get so upset with the destruction of historic buildings if the new stuff was better. But in this case we go from human-scaled ornamented row houses that respect the urban form to a brutal and featureless mega-structure that landed on the city from outer space. Eyesore of the year.

Reminds me of all the quality infill that removed the “derelict housing” along Brook and Chamberlayne in the 1960s for that quality rental housing we see there today. As some stated on Facebook, and here, this is a horrible design and out of character with true neighborhood. I mean it blends in well with the ugly parking structure across the street. Maybe Council can amend the parking permit program to exclude permits for buildings that have over 10 units and do not have 1 for 1 unit to park spaces. Or a zoning “down grade” might be something the voters/residents… Read more »

The Oregon Hill Neighborhood Association endorsed UB2 for this corridor in 2008, Michael. We are pushing for that rezoning.

What is OHNA doing about this “805w” project?

Is it too late to do something to stop it or at least MODIFY the scale of this thing?

Unoccupied may be a better definition than derelict to describe the existing buildings. Sadly the rendering of the proposed development is very disappointing. No relationship to anything nearby and rather ugly. I’d rather continue to see the “derelict” buildings and wait for something better to be proposed.

That was a “puff piece” extolling the virtues of a project with no regard to the negative impact on the community and nearby long term property owners.

Use of negative terms like “derelict’ or “blighted” etc to describe properties owned by real estate speculators who have emptied them, assist in getting public acceptance to replace those now empty and ugly-looking properties when they should be RESTORED to their original historic integrity.

I am hoping that the writer will delve further into this and offer a more balanced report, though his employer seems to be pro-development-regardless-of-the-consequences….

I also disagree with the use of “derelict” to describe the existing buildings. They have all been recently occupied up until the point this developer took them over. The pharmacy has been something of a mystery but the building appeared to be well maintained and was nice to look at. They are much higher quality buildings than the prefab engineered structure that will replace them.

The same family ran Paragon Pharmacy for many decades. They owned 801-809, along with the parking lot along South Laurel. Until a death of the head of the family, the properties were occupied, with the exception of the drug store. It is a real SHAME that they sold their entire portfolio to a group who has NO regard for the area and community in which they intend to build their out-of-scale project. Use of negative terms like “derelict’ or “blighted” etc to describe these and other properties acquired by real estate speculators who have emptied them, assist in getting public… Read more »

Does “mixed use” consider all of the artists that are being pushed out of Scotts Addition, Manchester, and surrounding areas. Is there room over there for the artists? How do we encourage the development specs for about a 20′ ceiling for the local circus school and the performance companies who gets bumped around the city every-time it is time to develop another spot. I am a business owner and VCU Arts grad, where is there to go next?

The Fan District and Oregon Hill are famous for their Victorian row houses. Every time we tear one (or four) of them down, that permanently undermines the fabric of the entire neighborhood.

Mark Olinger will rubber stamp approval for this project faster than you can say “three-ring circus.”

Is Olinger the city council member in that area? You never know WHO they are until election time, when their signs go up everywhere….

As a resident and property owner on this block, I am appalled that the planned structure is twice the height of the historic houses around it. It will destroy the look and feel of the neighborhood and completely overwhelm the already strained capacity for cars and pedestrians.

Brent: My friends who own the properties just west of the “805w” project heard about this “development” through the INTERNET. They’ve received NO notices from the city nor from their “representative” on the city council. From what they’ve been told, there were NO public hearings, nor were they given an opportunity to weigh in on this project being built right up to their property lines. This is quite ODD, considering that property owners traditionally get city notices whenever a nearby property owner plans to add a wing to his/her property or to even build a deck. Such notices include a… Read more »

The neighborhood and preservationists would have a lot more say if Oregon Hill had been designated a City Old and Historic District . It’s disappointing that JD Lewis, with a track record of rehabilitating historic properties in Richmond, decided to demolish these historic structures.

The design of 805W is an abomination. It will detract from our blooming and very “cool” city. Who would live in that space?
Back to the drawing board please…

HOW is that existing zoning has been modified to allow for a project this size that is out-of-scale with other properties on the same block? WHY does the city of Richmond completely disregard historic integrity, allowing developers to build ugly new structures as high and as dense as they please all over the city, with NO consideration toward the community being directly affected by their projects? (The destruction of old buildings and subsequent homogenization of West Grace Street, east of Harrison, as well as long swaths of West Broad Street east of Harrison, comes to mind.) WHY is the city… Read more »

My friends who own the properties just west of the “805w” project heard about this “development” through the INTERNET. They’ve received NO notices from the city nor from their “representative” on the city council. From what they’ve been told, there were NO public hearings, nor were they given an opportunity to weigh in on this project being built right up to their property lines. This is quite ODD, considering that property owners traditionally get city notices whenever a nearby property owner plans to add a wing to his/her property or to even build a deck. Such notices include a hearing… Read more »