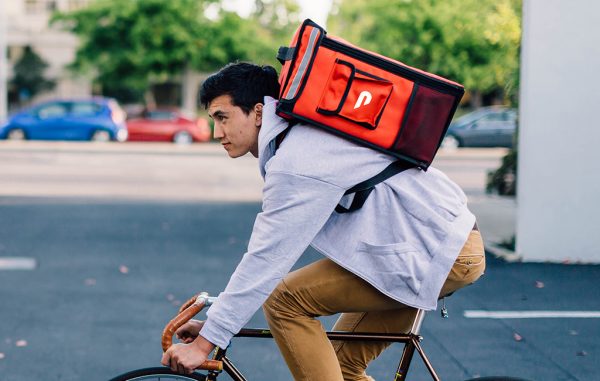 DoorDash delivers mostly via car but its “dashers” can deliver by bike. (DoorDash)

Another national company has entered the increasingly crowded Richmond food delivery market on the heels a hefty capital raise.

DoorDash launched in Richmond on Wednesday. The San Francisco-based startup offers online ordering and delivery from both national and local restaurants.

Users order through a website or mobile app, with delivery fees ranging from $2 to $4. The service is available from 11 a.m. to 10 p.m. and is operating throughout the city and much of Henrico County, with plans to gradually expand to all of greater Richmond.

There are at least four other national delivery services operating in the region: UberEats, EatStreet, GrubHub and Seamless.

DoorDash spokesman Brent Seals said Richmond has been on the company’s radar for a while after its success in the D.C. and Northern Virginia markets.

The entrance into Richmond is part of a bigger expansion by the 5-year-old company. Earlier this month it announced the completion of a $535 million venture funding round, money that will be used in part to increase its geographic presence from 600 to 1,600 cities through 2018. Richmond is the first city DoorDash has opened in since announcing the new capital.

The startup takes a commission of each order placed through its platform. Its drivers are independent contractors and are paid $1 per delivery plus a “pay boost,” a sliding amount based on distance and type of order, according to its website. Drivers also can collect tips.