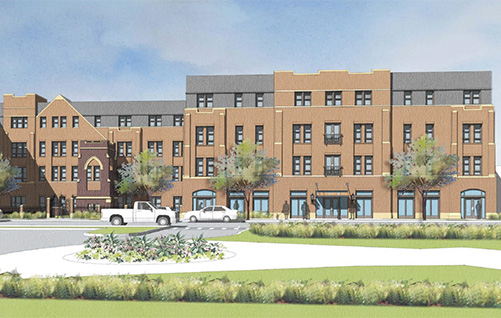 The developer behind the recent conversion of a Northside school building and two planned income-based housing developments in Richmond is setting the stage for its next project.

Maryland-based Community Preservation and Development Corp. is in the process of securing city approval for a 76-unit apartment building that would replace two dilapidated houses and a vacant church complex at 1218, 1224, 1226 and 1228 E. Brookland Park Blvd.

CPDC was behind the $11.4 million conversion of that building into the new Highland Park Senior Apartments, which opened in early 2017. That project, along with CPDC’s planned Jackson Place project and Baker School redevelopment in the Jackson Ward area, are planned to move 200 residents from the Richmond Redevelopment and Housing Authority’s Fay Towers near Gilpin Court.

Like those projects, the Brookland Park Boulevard apartments would be income-based, with rental rates ranging from 40 to 60 percent of the area median income. The four-story building would consist of one-, two- and three-bedroom units, along with off-street parking, bicycle storage and flex space for the surrounding community.

While the existing structures would be demolished, elements of the church building would be preserved and worked into the new structure, said Lee Alford of CPDC’s Richmond office.

“Although we would be tearing down the structures that are there, we are going to be incorporating some of the historic elements of the church and preserving front walls of the sanctuary,” he said.

Alford said CPDC consulted with Richmond architect and city preservation planner Kim Chen on designing the building in compliance with the National Historic Preservation Act, which requires projects that could have federal funding to take into account effects on historic structures. He said the inclusion of the church into the building’s design resulted from that process.

Like the Highland Park apartments across the street, Alford said the structure would be built to Earthcraft green-building standards. Silver Spring-based architecture firm Torti Gallas + Partners is designing the building. Alford said a contractor has not been selected.

Alford put the project cost at about $14 million, funding for which would come from sources that he said are being determined. While a schedule for construction has not been set, Alford said it aims for the 15-month project to start in 2019.

The apartments require a special-use permit from City Council, which is scheduled to consider the request next Monday. The planning commission endorsed the permit request this week. The Roth Jackson law firm is representing CPDC in its request.

CPDC purchased the four parcels in 2015 and 2016 through its Community Housing Inc. and Nehemiah Ventures LLC entities. The combined price totaled $325,000.

Alford said CPDC has been eyeing the property as a supplement to the Highland Park apartments and other efforts to revitalize the Six Points corridor, so named for the six-armed intersection formed by the convergence of Brookland Park Boulevard, Meadowbridge Road, and Second and Dill avenues. A city-funded project in 2015 reshaped that intersection as a pedestrian-friendly roundabout.

“It speaks to our strategic plan that we put in place two years ago to do more community-based development where we would develop multiple projects in a concentrated area,” Alford said, noting area efforts by Richmond-based Storefront for Community Design, Groundwork RVA and Virginia Local Initiatives Support Corp.

“We also see that there’s very little professionally managed multifamily” in that area, Alford said. “We think that that’s a housing gap that we can help to fill.”

Beyond Six Points, Alford said CPDC remains in the financing stage for its planned Baker School and Jackson Place projects, both of which he said it aims to commence this year, potentially in the third quarter.

The Baker School building at 100 W. Baker St. is planned to be redeveloped into 48 senior apartments. The building is just west of the St. Luke Building that developer Charles Ayers Jr. is converting into 14 apartments and a medical office space.

The $32 million Jackson Place development would add commercial space, parking and 154 apartments to the city block bordered by First and Second streets and Duval and Jackson streets in Jackson Ward.

Note: This article has been updated to state that CPDC aims to start the project in 2019. An earlier version indicated an earlier time frame.

This promises to be a great development for this part of #RVA. Well done to Brian Noel & the folks at VACU for their role is financing this project.

Kudos to CPDC for working to incorporate elements of the historic structure!

This is way out of scale for the surrounding neighborhood. I hope the special use permit is reviewed long and hard by Council. This projects abuts single family homes and and the Five Points is a 2 story commercial remains of old Town of Highland Park. Using the old school (that was senior apts that went under in 2000) as senior housing works but this is far out of scale and much larger than the church. All special use permits should be held until the 20 years Master Plan is updated.

Not surprisingly, these concerns were voiced by the surrounding neighborhoods during the several planning charrettes the developer held. Scale, design that reflected the historic character of the neighborhood (but didn’t necessarily mimic it), preservation of a substantial portion of the existing church’s façade, a broken-up façade that did not lok like the prison-like structures going up in the Bottom and instead reflects Highland Park’s character, were all clearly communicated to the developers – by the community and city leaders present. This design is the antithesis of all of that.