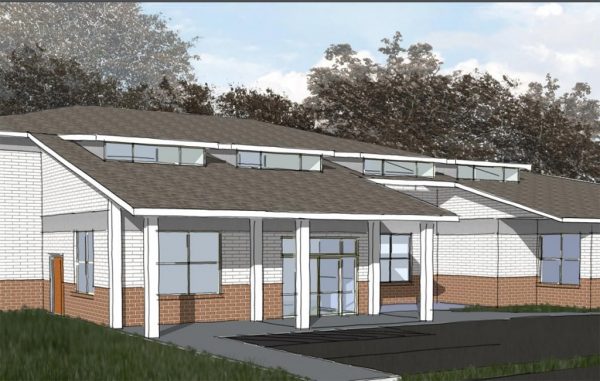 Rendering of the planned facility at Camp Baker. (ARC)

A nonprofit-run campground in Chesterfield County is set for a $2.5 million upgrade.

The organization, which serves people with intellectual and developmental disabilities, uses Camp Baker for its summer camps and respite care.

The new building will serve many purposes and join an existing 62-bed lodge, dining hall, outdoor amphitheater and small cabins at the camp.

“We have a lot of medically fragile folks we support, they can be affected by dramatic weather,” he said. “A lot of the buildings we have are small and one-story. They’re too contained to do anything with physical activity or recreational with our folks.”

In addition to running Camp Baker, ARC also operates adult day support and afterschool programs, aimed to help those who are coping with the “real world” challenges of living with a disability, according to its website. It also trains and places disabled participants in jobs. More than half of ARC’s 400 employees have a disability.

ARC also operates the ARC Park, a playground and park designed to be accessible for individuals with disabilities located near its Greater Richmond headquarters.

Many programs the Greater Richmond ARC operates are at max capacity with waiting lists. The new facility would allow the nonprofit to increase the number of individuals it serves.

Plans for the new Camp Baker facility have been approved by Chesterfield County, which owns the land. HBA Architecture and Interior Design is the architect, and Payne said it is selecting a general contractor.

The Greater Richmond ARC is amid a fundraising campaign for the facility and already has raised $1.9 million of the $2.5 million cost.

The organization hopes to break ground in August. Payne said it’s aiming for a May 2019 opening.

It had over $14.2 million in revenue in 2016, according to nonprofit tracker Guidestar.