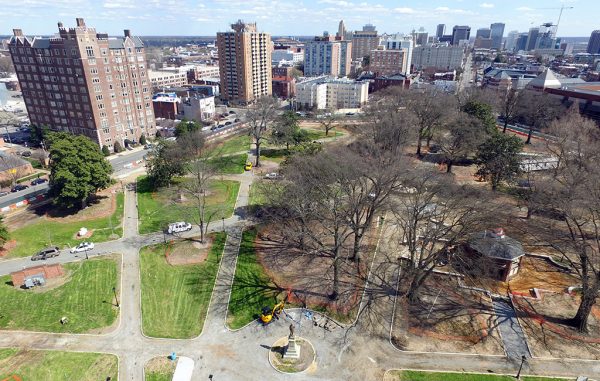 Renovations on Monroe Park are nearing a close. (Kieran McQuilkin)

As a round of heavy renovations to one of the city’s most visible parks is nearing the finish line, work on another nearby park is about to get started.

Monroe Park is scheduled to re-open this summer after a $7 million, 18-month overhaul.

Located at 719 E. Franklin St. in the heart of VCU, the city-owned park is getting new grass, trees, repaved paths, brick sidewalks, as well as WiFi and improved lighting.

The 7-acre park’s Checkers House, a brick gazebo-like structure in the park’s center, is also receiving a renovation to house both a coffee shop vendor and a VCU police post.

Alice Massie, president of the Monroe Park Conservancy, a nonprofit created to spearhead the renovation of the park, said construction is close to wrapping up with a mid- to late June reopening target.

“It really depends on when the grass grows,” Massie said.

The conservancy raised $3 million toward renovations, an amount that was then matched by the city. Massie said VCU also contributed money to the project. She said the conservancy is continuing to fundraise for amenities such as tables and benches.

“The conservancy would like to raise $1.5 million more,” she said. “That number depends on how many amenities we want to add.”

Meanwhile, about a mile northeast, plans to renovate Jackson Ward’s Abner Clay Park are in the works. 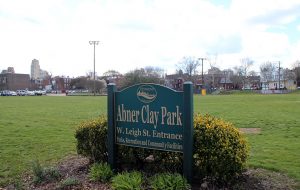 Work would include demolition of old features to make way for new walkways, lighting and landscaping. The 4-acre park at the intersection of Brook Road and West Clay Street would also get a resurfaced basketball court, a new pavilion and plaza, and added trees and trash bins.

Plans were submitted on behalf of the city by local engineering firm Timmons Group to the Commission of Architectural Review in November.

The purpose of the project, according to the CAR application, is to “revitalize Abner Clay Park and re-energize the surrounding Jackson Ward neighborhood.

“As the park ages, the condition of the paving and landscape have declined and the park is underutilized for such a large city property,” the application continues.

The project’s cost has not yet been determined, but the application estimates it will be between $850,000 and $1 million. Some of that will be covered by $556,000 that’s readily available in Abner Clay’s progress account with the city.

Finalized plans are scheduled to be submitted to the city by the end of April.

Jay Som, a local developer and board member of the Historic Jackson Ward Association, said the neighborhood group sees the park upgrades as a chance to bolster the neighborhood’s revitalization.

“Right now it’s not being utilized to its highest and best use,” Som said.

He added that with the bulk of the funding already in place, the timeline for construction depends on securing the remaining money, which may come from private sources.

“It’s completely contingent on financing,” Som said. “(The city’s parks department) thinks it’s a very doable project with a budget. We’re trying to drill down to get some private funding, since the bulk of it has to come from the city.”

Thank you for highlighting Abner Clay. Our wonderful neighborhood association here in Jackson Ward has worked relentlessly to get this park renovation started, something that has been delayed by the City for over 10 years. Let this be a push for all of City Council to vote on finally giving this project the green light. In the meantime, our association in addition with an annonynous donor, VCU, and over 300 amazing volunteers have successfully rennovated the playground. City Council – please give us what we need, resource wise, to make this happen in an efficient and effective manner. And thank… Read more »