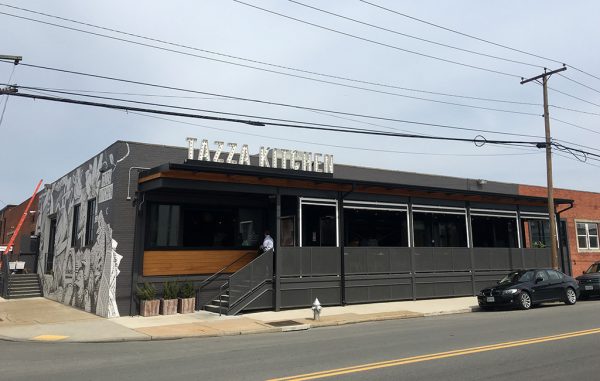 The Community Foundation will share its building with Tazza Kitchen. (Mike Platania)

Scott’s Addition has netted another notable office tenant, this time from the nonprofit sector.

The Community Foundation is preparing to move its headquarters from the Boulders office park, where it’s been for more than 20 years, to a recently developed building at 3405 W. Moore St.

“The big opportunity for us is to be part of a growing and evolving area in the city, outside of a traditional office park,” said Sherrie Armstrong, the foundation’s president and CEO.

The Community Foundation, which provides grant money to local nonprofits, aims to complete the move by yearend. It will have 45 employees working out of the new office.

Armstrong said it plans to keep the design similar to other new offices that have opened in the sought-after neighborhood.

“We’ll have some open space, a little bit of the warehouse feel. We’re trying to follow more modern design,” she said.

The new space is being designed by Evolve Architecture, with construction set to begin soon.

The 1500 Roseneath building will have about 8,400 square feet of space left after The Community Foundation moves in.

Jason Guillot, a principal with Thalhimer Realty Partner who manages the building, said the remaining space will be split in half and converted into creative office/retail space and an interior parking garage for tenants.

Community Foundation was founded in 1968 and reported $44.6 million in revenue in 2016, according to nonprofit tracker GuideStar.

It will follow other recent arrivals to the Scott’s Addition office market, including local ad agency Barber Martin, which also recently left Boulders for space at 1408 Roseneath Road. Last month, tech startup Blueswipe signed on to move its headquarters to the neighborhood, heading across the street to the redeveloped HandCraft building.