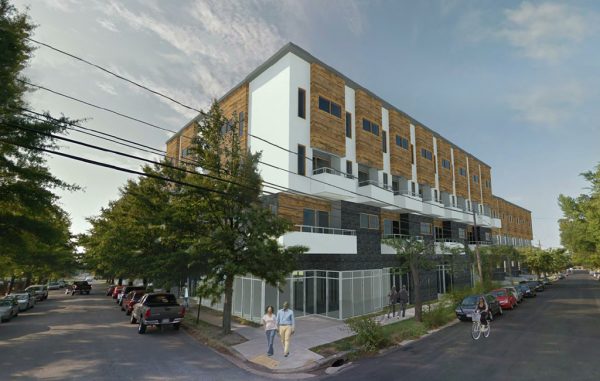 Rendering of the apartment building planned for the corner of McDonough and 12th streets. (ADO)

Having completed one infill project up the street, a local builder-developer team is eyeing an adjacent city block to continue their efforts in Manchester.

Corinthian Construction’s Ben Adamson and Macfarlane Partners’ Charles Macfarlane are looking to extend their Manchester Park project along McDonough Street to an adjacent block across 12th Street, where they are planning a new mixed-use building with 33 apartments and a 4,000-square-foot corner commercial space.

The pair has applied for a special-use permit to allow for the 32,000-square-foot building, which would fill six parcels totaling a half-acre at the corner of McDonough and 12th streets. The request was on the city planning commission’s consent agenda Monday.

Adamson said the development would be similar to Manchester Park, which is anchored by a 12-unit apartment building with a corner commercial space that now houses McDonough Market. Six duplexes round out the rest of that development, located along McDonough between 13th and 14th streets.

Those efforts already have been extended to the 1200 block, where Adamson and Macfarlane have built three new duplexes facing 13th Street. The new mixed-use building would be adjacent to those on the block’s northeast corner.

The parcels were among those Macfarlane purchased from the Virginia Museum of Fine Arts Foundation when it sold about 30 acres in Manchester that had been donated by philanthropist and Overnite Transportation founder Harwood Cochrane. Another 130 parcels were purchased by developers Robin Miller and Dan Gecker, whose developments include the nearby 1200 Semmes apartments on the other side of McDonough Street.

Adamson said the site would include 33 parking spaces – one for each apartment unit – along with a courtyard area. While they don’t have a tenant lined up for the commercial space, Adamson said it could accommodate a restaurant or other commercial use such as retail or office.

“It could be a restaurant, it could be office – something that is a benefit to the community and other tenants,” Adamson said. “We want it to be something that’s attractive to the folks that are living there as well, so we’ll be careful picking who that tenant is.”

The apartments will consist of one- and two-bedroom units ranging in size from about 675 to 900 square feet. Monthly rents will range from about $1,150 to $1,450, Adamson said.

Local firm ADO is the architect on the project. Adamson said they haven’t selected a lender for the project, a cost estimate for which has yet to be determined.

As with Manchester Park, Adamson and Macfarlane are approaching this project as equal partners, with Adamson taking the lead as developer and general contractor. Adamson’s firm has served as Macfarlane’s builder on past projects such as the Brewer’s Café-anchored apartments at 12th and Bainbridge streets and several duplexes along Perry Street.

Adamson said the Manchester Park apartments have performed well and are fully leased. That project included some enhancements to the adjacent city-owned Alice Fitz Playground at 13th and Perry streets.

He said they’re looking to break ground mid-summer on the 1200 block apartments and complete construction by this time next year. After that, Adamson said, they’ll be looking to fill out the rest of the block, eyeing a quarter-acre parcel at the corner of 13th and Perry streets with a to-be-determined development.

When will a grocer wake up and see the potential on Manchester?

Bruce there is NOT even close to enough residents in Old Manchester (east of Commerce) or the Manchester area between Commerce and Jeff Davis to support a store. Out of the 144 neighborhoods in the city they are 91 in total population and 118 in density in Old Manchester. Census numbers show almost 3000 residents each in Randolph and Westover and they have no grocery store in their neighborhoods. Just over 3000 live in the Census tract that includes all of old Manchester, most of Woodland Heights, along with parts of Blackwell and Swansboro. Both side of Manchester would need… Read more »

It is not just Old Manchester that they need to be looking at. Look at the whole list you just gave and notice that none of those neighborhoods are served, but all are within easy driving distance of Manchester. This whole area of the City needs a grocery store. When Wegman’s located out in Short Pump did they only consider the numbers of residents within 1/2 a mile? If they did there would not have been many. And adding up all those people does not even include all the people driving by on the way home to the suburbs who… Read more »