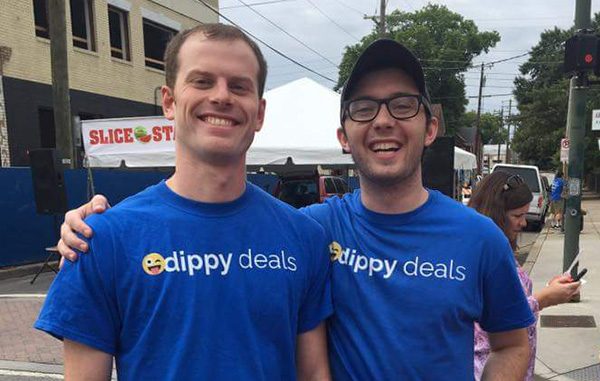 Fresh off moving into new Shockoe Bottom digs, a local startup is looking to raise some extra cash.

Dippy, a marketing company that sends personalized food and entertainment text message deals to users, has opened its first fundraising round.

“The advice I hear is that we’re on the timeline of the investors,” Rallis said. “We have time to not necessarily pick and choose investors, but to find the right people.”

The raise is being offered as convertible notes, a form of debt that converts into equity over time.

Dippy has more than 20 businesses as clients, many with multiple locations such as Sweet Frog and Saladworks. Rallis said chain restaurants have been a sweet spot for growth.

“They’re a huge opportunity because most don’t have existing loyalty programs already,” he said. “Most franchises have mandated local advertising expenditures as a part of franchise fees, it’s basically a built-in market (for us).”

The funds from the capital raise will help Dippy expand its footprint throughout the Mid-Atlantic and Northeast. It currently operates solely in Richmond and is planning an expansion by the end of the month, starting with Charlottesville, Virginia Beach and Northern Virginia. The startup also is looking to diversify its client list beyond mostly eateries.

“We’ve been mostly a great product offering for food and restaurants. We want to expand to other entertainment venues like movie theaters, amusement parks – things that would match our millennial market,” Rallis said, noting it has worked locally with The Byrd Theatre and Peak Experiences climbing gym.

A few months after launching, Dippy had about 600 users. In the year since, Rallis said it has added thousands of users and is about three months away from reaching profitability. The startup has a staff of six and develops its technology in house.

In February, Dippy launched a referral system for users to share deals with friends, which Rallis said will continue to be a point of growth.

“Our assumption going in was that people want to receive deals from businesses that they love, over a channel they like such as text, not email,” he said. “Expanding our sharing technology over text was a huge advance for us.”

The company had been operating out of a home office in the Fan until moving last month into Startup Virginia and Capital One’s new 1717 Innovation Center in the Bottom.

As Dippy opens its first funding round, another startup with a presence in Richmond has closed on its first capital raise.

The company, part of Lighthouse Labs’ class of 2017, went live in Richmond in December and is looking to use the new funding to build out technology and boost marketing efforts as it continue scaling throughout the country.

“We’re in 15 markets now, and Maine through Virginia is where most of our business is,” said RoundTrip co-founder Mark Switaj. “We’re looking to go into Texas, Missouri, California, the Pacific Northwest and Tennessee.”