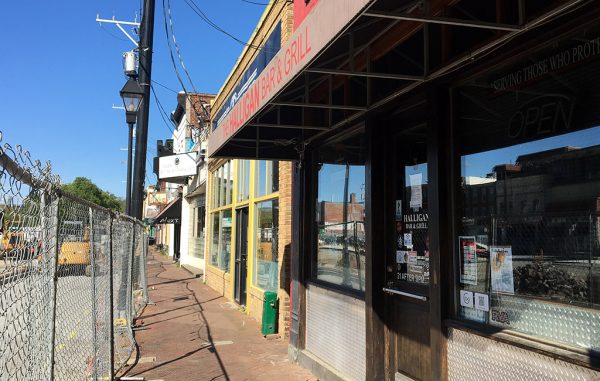 One of the founders of a beloved pizza joint in the Fan is branching out with a concept of his own in Shockoe Bottom.

Victor Guevara of Belmont Pizzeria and his wife, Melinda, have secured a lease to take over the former Halligan Bar and Grill space at 3 N. 17th St.

The lease coincides with the recent sale of the building, which was purchased April 16 for $525,000 by an entity tied to David Levine of Plus Properties, Ronnie Shriner and A.J. Shriar.

The pending pizza venture will not carry Belmont Pizzeria’s name or brand, Victor Guevara said, adding that they are still mulling names for the business.

“We’re just really excited to be doing this on our own,” he said. “This is a business that my wife is mostly going to handle, and she’s got some great plans for the restaurant.”

It will be a wood-fired pizza concept, Guevara said, with a menu he described as more rustic, while being careful not to label the pizza as Neapolitan.

“We’re having a custom-made wood-fired oven being made for the space, and it should be here in a couple of months,” Victor said. “It’s going to have a Neapolitan feel, but it’s going to be our own take.”

When it opens as planned this summer, it will be the couple’s first venture together. Victor will continue to oversee operations at Belmont Pizzeria.

“That’s not going to change,” he said. “This business is something me and my wife are going to oversee together; we’re doing this on our own.” 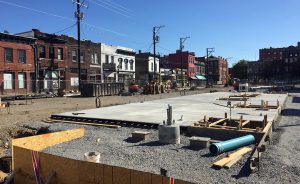 Construction on the Farmer’s Market site continues, with the former Halligan space in the background.

The Shockoe Bottom space was left vacant last fall when Halligan shut it down, along with its West Broad Village location.

The 1,400-square-foot restaurant will include 13 to 17 feet of patio space, courtesy of the 17th Street Farmer’s Market project underway in front of the building.

Levine said the group was drawn to the property because of the farmer’s market project and other private and public investments, including the recently opened Main Street Station and Capital One’s 1717 Innovation Center nearby.

“There’s just so much activity happening in the area,” Levine said. “And with everyone getting priced out of Scott’s Addition, Shockoe Bottom seems to be the next place for investment.”

Levine, Shriner and Shriar are no strangers to infill and mixed-use development.

The group recently took home top honors during this year’s Greater Richmond Association for Commercial Real Estate awards for its 2028 W. Cary St. development at the corner of North Rowland and West Cary streets. The project includes six apartments and houses Olio on the ground floor.

Work also is underway at 810-814 N. Robinson St., an infill development where Levine and investor Rob Alberti plan to deliver two restaurant spaces – one large enough for a dine-in concept, the other take out. The space will also include a large, three-bedroom and two-bathroom unit.

Well we will see if they have that outdoor seating when they open this summer! It started last July and this April they took down the last of the old green roof. I doubt the market will be re-opened that soon.