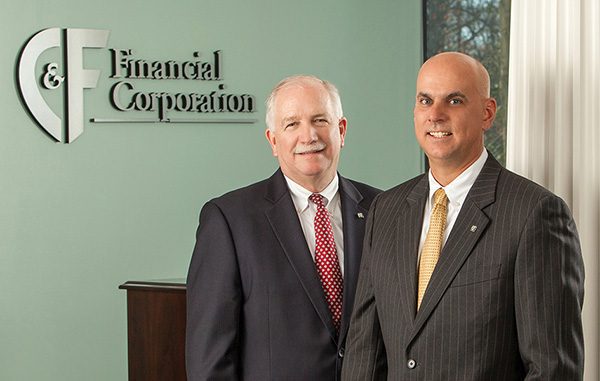 Larry Dillon, left, will be succeeded by Tom Cherry. (C&F)

A longtime local bank CEO is handing over the reins.

Larry Dillon, who has been at the helm of C&F Bank for nearly three decades, told shareholders and staff this week he’ll step down later this year, assuming the role of executive chairman.

The 65-year-old will be succeeded by Tom Cherry, who for years has been groomed by the West Point-based bank to take over its top seat.

Cherry started with the bank in 1996 as chief accounting officer. He became CFO two years later and president in 2004.

“We have been working on this transition for years now,” Dillon told shareholders this week, in a letter shared with BizSense. “Even before he was named president, I brought Tom into all major decisions for the company and shared with him my thought processes as to how I would make a decision.”

The transition, expected to occur later this year or early next year, will end Dillon’s 29-year run as CEO.

He joined the bank 41 years ago, jumping from a career as bank examiner with the state’s Bureau of Financial Institutions. C&F back then had one office in West Point, around $30 million in assets about 20 employees, Dillon said.

He was 36 when he took over leadership of the bank from the late Bill Robinson, who was 77 at the time.

“On Dec. 1, I will have served in the role of CEO for this company for 29 years,” he said. “That is probably long enough for anyone to hold that position.” 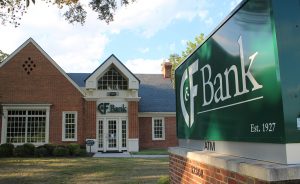 He’s overseen a period of expansion, which included adding branches and creating the C&F Financial holding company and a mortgage arm. In recent years it weathered the recession, took over the troubled Central Virginia Bank in 2014 and has remained independent in an age of rampant consolidation.

“If Bill Robinson was still here, I would hope that he would say that I’ve done okay in watching after his bank all these years,” Dillon said.

He said he’ll remain actively involved with the bank.

“I’m not planning to retire. I will take more vacations, spend more time with my grandchildren. But this place is my home and these people are my family.”

He’ll also look to continue to help Cherry as needed.

“Tom is ready and I hope I can be a mentor to him for the next few years and kind of smooth his path, as Mr. Robinson did for me.”

C&F was founded in 1927 as Farmers and Mechanics Bank. During the Great Depression it merged with the bank across the street, Citizens Exchange Bank, which resulted in the Citizens & Farmers brand, now known largely as C&F.

It isn’t the only regional bank going through a regime change.

Hampton Roads-based TowneBank announced last month that founding CEO Bob Aston has stepped back from that post, turning it over to longtime president Morgan Davis as the bank begins to plot a long-term succession plan.

It’s no coincidence that great banks are led by great people. Congrats to Mr. Dillon and I know Tom will continue the tradition of great leadership

nice people, but their locations could not be more of a pain from City of Richmond, so I’m switching slowly to Union.

Charles – sending you a note now. I’d love to talk with you about how we can be very convenient for you. Matthew Steilberg, SVP/Director of Retail Banking 804.241.6172