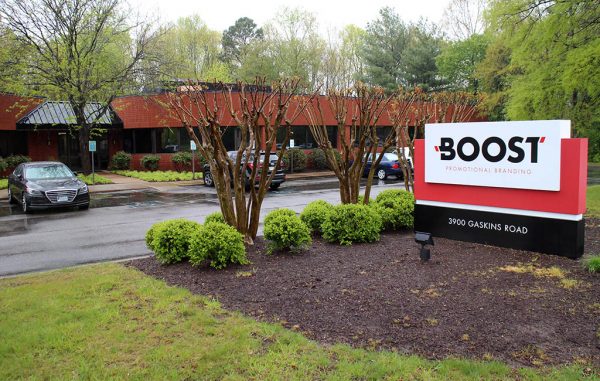 Boost will move from its leased space at 3900 Gaskins Road. (Jonathan Spiers)

A recently rebranded promotional marketing firm has found some new digs to go with its new name.

Boost plans to move from its current headquarters at 3900 Gaskins Road when Draper Aden moves its headquarters to 1030 Wilmer Ave., a 44,000-square-foot space it recently leased that formerly housed SunTrust Technology Center.

Jeff Hall, chief strategist for Boost, said the move to Villa Park will happen by yearend, when Boost’s Gaskins lease is set to expire.

Hall said the purchase, which includes the building’s 5-acre parcel, is set to close Monday at about $2.95 million.

The 20-year-old building, which was built for Draper Aden, was most recently assessed at $2.66 million, according to Henrico County property records.

Fred Plaisted with Commonwealth Commercial represented Boost in the purchase and is leasing the Gaskins space for landlord John Whitlock. CBRE | Richmond’s Matt Anderson and Will Bradley represented Draper Aden in the transaction.

The move more than doubles Boost’s current leased space, which Hall said totals 12,000 square feet. He said recent acquisitions that have added to its staff and client base over the past couple years necessitate the move.

“We’ve been here seven years, and we’ve always kind of shoehorned Boost into whatever space was available at the time,” Hall said. 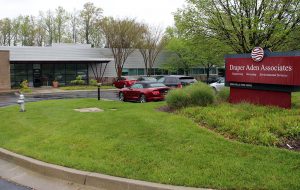 “It’s a great opportunity for us to look for a new piece of property that we can call our own. We have a window of opportunity to go in and do some demo and some retrofit and make it our space and our home for the foreseeable future.”

Hall said Boost is interviewing firms for the retrofit, which would mainly involve removing some walls and other interior work. He said Draper Aden is aiming to move out of the building by fall.

Over the past two years, Boost has nearly doubled its annual revenue, from about $19 million in 2016 to $36 million now, Jeff Hall said. Its staff totals 90 employees, with about 60 in Richmond and the rest spread out across the country, including Indiana, Florida and Seattle.

Hall attributes the surge in growth to a pair of acquisitions made over the past year. Last April, Boost acquired Alabama-based EBSCO Creative Concepts, and in September, it purchased Nashville-based Sanders Marketing Group.

Those deals followed other acquisitions for Boost, which was founded in 1983 as NewClients and rebranded last August. The firm purchased Richmond-based VATEX America in 2013 and Montana-based PromoWest the following year.

Hall has said the company aims to complete one to two acquisitions per year as it continues to expand its national reach. He said the Villa Park location will aid in that effort as a firm base of operations with room to grow.

“It’s going to give us a lot of expansion opportunity, a lot more parking, and it’s an awesome location geographically and physically,” Hall said.

With the move, Boost will join several other businesses that call Villa Park Drive home. The road, which loops around St. Joseph’s Villa at Brook and Parham Roads, is also home to direct mail and printing company Colortree Group, which last year returned to local ownership.

Colortree’s building and 12.8-acre site, purchased two years ago for $11 million, are next door to the Brown Distributing Co. facility and across Villa Park Drive from the 46-acre Bank of America complex, which was purchased last year in a $38 million deal.