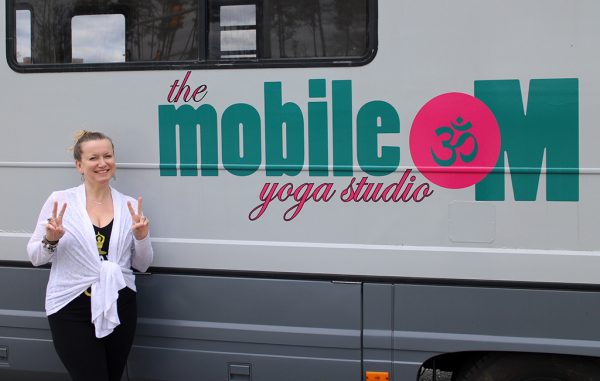 Where most see a broken-down RV, Shannon Somogyi saw a business opportunity.

This spring Somogyi is rolling out Mobile Om Yoga & Wellness, a yoga studio and retail shop inside a restored 1990s-era camper.

The idea was born about three years ago, when Somogyi, who has taught yoga at studios around town including Project Yoga Richmond and Studio D Yoga, began thinking of opening her own studio. When she had trouble finding a space, she eventually decided to go mobile, which is something she’s used to.

“My grandfather who raised me was a truck driver and I spent a lot of my younger days on the road with him,” Somogyi said. “(Mobile Om) is kind of like going back to my roots.”

When she first found the RV – a 34-foot 1990 Fleetwood Pace Arrow – it was infested with snakes, mice and other vermin.

“We rescued it from a junkyard where she’d been sitting for like 12 years. We gutted it down to the frame, rebuilt the engine and got new tires and brakes,” Somogyi said.

She said she spent tens of thousands to rebuild the RV, affectionately named Jolene, a tribute to Dolly Parton’s hit song from 1973.

“I grew up listening to old-school country and Dolly Parton was always my favorite,” Somogyi said.

Now the Mobile Om has cork flooring, wood siding and a working kitchenette. She said the RV can fit between five and 10 people, depending on the type of class. 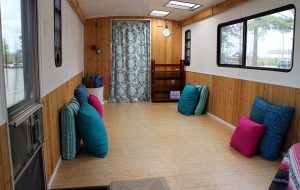 Somogyi plans to take the RV out beginning this spring and summer to festivals, events, breweries and office parks around Richmond. The plan is to be out around town most nights of the week, and she said it has a canopy which folds out for a small retail area, where she sells locally made goods like Beez Nuts Balms and Burn Down For What Candles.

“Last year was a soft opening, we were thinking, ‘Let’s just get her on the road and see how the engine’s running,’” Somogyi said. “This year is like the re-reveal.”

In addition to teaching traditional yoga, Somogyi is also a certified yoga therapist and teaches specific types of yoga such as injury rehabilitation and addiction recovery.

As Somogyi prepares to hit the road this summer, another local entrepreneur is getting set to open a brick-and-mortar yoga studio. Katie Santoro is planning to open Lunge Yoga in Forest Hill.