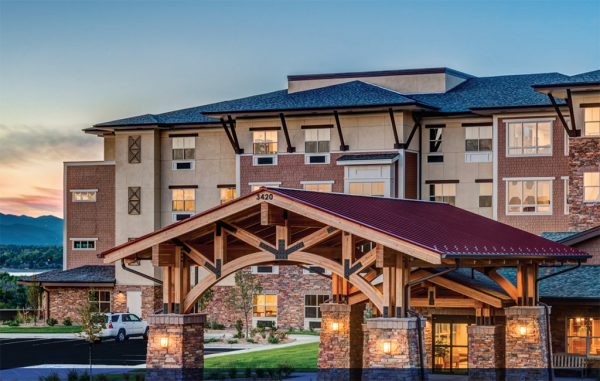 With more than 350 apartments on the way and a $28 million brewery recently tapped, another new use is in the works for West Creek Business Park.

Erickson Living, a Maryland-based developer and owner of retirement communities, is planning a 1,450-unit assisted living complex on 95 acres on the eastern side of Wilkes Ridge Parkway, just south of West Broad Street.

The company is under contract to purchase the land, which is owned by the Pruitt family and Bill Goodwin’s Riverstone Group, the developers of the 3,500-acre park.

The Erickson project’s units will span 14 buildings, each four to five stories, 120,000 square feet of community space and a separate 5,000-square-foot sales center.

In total, the company plans to build 2.2 million square feet of living space and 1,900 parking spaces. Other amenities would include restaurants, retail shops, a fitness center, a library, game rooms and an art studio.

Adam Kane, vice president of corporate development at Erickson, said the exact cost of the development has not been determined but it will be over $200 million.

Kane said there’s no set timeline for groundbreaking, but noted it would like to have the sales and marketing center open within two years.

Plans for the project were filed with Goochland County last month. On Thursday, the county planning commission will vote to change West Creek’s master plan to include the new development.

“We want to get through the county approval process and then there are some road improvements (to access the parcel) that need to be made,” Kane said. “We’re a few years away from starting the whole community, assuming everything goes well.”

Erickson is a national company, serving over 24,000 seniors across 20 communities in 11 states, including two in Virginia – in Springfield and Ashburn. Its residents are typically in their late 70s or early 80s, and the company offers assisted and independent living units, memory care and nursing units.

Kane said the success of its communities in Northern Virginia played in the decision to come to Richmond.

“If you look at the demographics, the Richmond market has an aging population and some successful retirement communities,” he said. “We’ve been successful in Northern Virginia and think we can replicate that and bring it to the people in Richmond.”

Kane said Erickson looked all over the Richmond region, but an influx of both commercial and residential development made the Short Pump area appealing.

“There’s a desire for seniors to stay close and proximate to where they’re living or where their children are living. The Short Pump area stood out as the place to be if you want to attract seniors to this type of product,” he said.

Plans on file with the county show Moseley Architects and Kimley-Horn and Associates as the project’s architect and engineer, respectively. Williams Mullen attorney Preston Lloyd Jr. is Erickson’s legal representative.

The parcel it plans to build on initially was slated to be another retirement community.

Last spring Nebraska-based Resort Lifestyle Communities submitted plans to build Tuckahoe Pines, a 55-and-up community consisting of 130 suites. Bob Lewis, RLC’s director of development, said it is no longer planning to build Tuckahoe Pines on that location and instead is eyeing a site 10 miles down the road, just south of Patterson Avenue near the Rivergate community.

Lewis said RLC decided to scrap the project in West Creek six months ago and that it will submit an application in coming weeks for the new location. Tuckahoe Pines now is aiming for a spring 2019 groundbreaking.

The Erickson project would add to a changing mix of uses in West Creek.

Hardywood Park Craft Brewery opened its new facility there in April – the second brewery to open in the business park. Bristol Development Group’s 2000 West Creek apartment project is set to open its first building this summer, with more than 350 units planned overall. It will be West Creek’s first residential component.

This CCRC in conjunction with the HHHunt development on Horrocks Road could make West Creek a focal point for geezer housing. Its a strong play. I look forward to hearing news soon on the Patterson Avenue entrance to West Creek, which was rezoned last summer. It wouldn’t be like the Pruitts to rezone land on a lark. They always have a plan.

Wow, that’s a lot of assisted living units. I don’t know, but 1450 units sounds like more than all the Richmond-area retirement facilities currently have put together. And some of those may be expanding, too. Will there be enough boomers locally (who can afford to go there) to fill it up?

The number of “Seniors” in the area is growing at a staggering pace. Within 5 years “Boomers” and older will be the largest % of the demographic. Even if only a small percentage can afford the better units, that is still thousands-upon-thousands of people; annually.

I think that Millenials are actually the biggest cohort at this point, but as the Boom reaches age 75+, that age group will still be the fastest growing %age-wise. My question really is affordability. Yes, a few thousand area residents will reach their mid-70s in the next few years, but those with the income/assets to afford Erickson or otherwise may only number locally in the hundreds of people annually. Perhaps Erickson thinks that a Richmond location will be less expensive than their NOVA facilities, and appeal to Boomers from NOVA who area ready to leave.

I live next to Greeenspring (Erickson’s retirement community in Springfield) and I can tell you that it is a HUGE development/operation…and they are in the process of expanding. They must have at least 1,400 units, if not more. It is a nice community for seniors and the services they provide are second to none (it’s also VERY expensive to live there). For someone who lives in close proximity to this community, I can say that there needs to be a firehouse/ambulance service nearby because they are constantly going there (probably my biggest complaint because of all the sirens), and there… Read more »