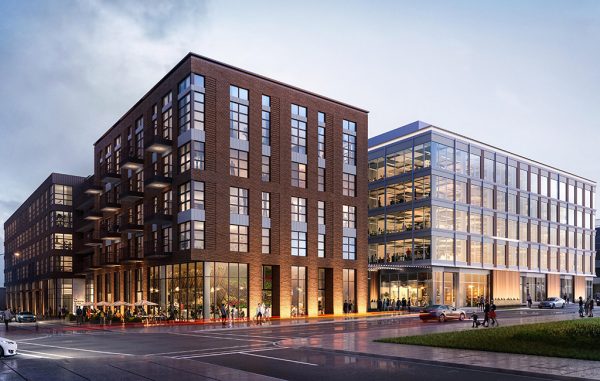 Rendering of planned buildings at The Current. (Lynx Ventures)

A trio of developers with a history of investment on the Southside is going big in Manchester.

“We want for this project to be a catalyst piece,” Lynx principal Bernard Harkless said. “We want this to be a spark that really jumpstarts more development on the Southside … that’s why it’s called The Current.”

The firm, which owns the land, plans to submit its plan of development with the city by early summer, with construction set to kick off by October or November – taking about 20 months to complete. The site currently serves as parking for the group’s neighboring Plant Zero development.

A four-story parking garage with 270 to 330 spaces will connect the two buildings in the middle of the development, with access via Fifth Street.

The development firm also plans to bore the power lines on its property along Fourth, Fifth and Hull streets underground to create improved street-level appearance for The Current. 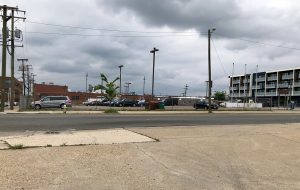 The surface lot between Fourth and Fifth streets in Manchester. (J. Elias O’Neal)

“We look at the courtyard as an important, and necessary, amenity for a project of this scope,” Harkless said. “The courtyard is designed to be the central meeting point for the neighborhood … something people in the area have wanted for a while.”

Lynx Ventures plans to handle leasing for The Current in house.

While Lynx Ventures has been a proponent of low-income workforce housing in Manchester, Harkless said The Current will be leasing its mix of studio, one- and two-bedroom apartments at market rates in an attempt to lure retailers and restaurants.

“In this case, we need those higher rents to help drive retail to the project,” Harkless said.

The group’s plans were spurred in part by the recent central business district rezoning that allows looser parking requirements and taller buildings on surface lots in surrounding blocks.

“Getting the rezoning was important because we can build this development outright,” Harkless said.

The Current is the largest new construction project Lynx Ventures has undertaken since it was launched earlier this year by Harkless, Gregory and his son John Gregory. And it adds to the company’s running tab of investment in Manchester and the surrounding area.

The company is overseeing the $14.4 million addition of 104 residential units at New Manchester Flats, a multi-phased development it first launched with Fountainhead at 915 E. Fourth St. in southern Manchester.

Ushering a new phase for Clopton, Lynx has secured a $622,000 loan from Virginia Community Capital to redevelop three 20,000-square-foot buildings onsite that will include a commercial kitchen.

Bernard Harkless is one of the rising young stars in the City’s development community. The Lynx plan is one of several ambitious designs coming to that strip of Hull Street from the 14th Street bridge to Commerce Avenue, creating a canyon of exciting new buildings. There will be an amazing change there within 3-5 years.