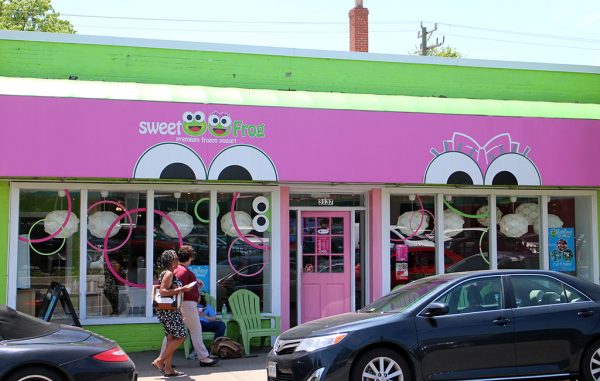 One of SweetFrog’s local shops in Carytown. (Mike Platania)

The deal is a part of a broader growth plan by SweetFrog, which was founded locally in 2009 and acquired by local private equity firm Boxwood Partners in 2015.

“We’re trying to find good fro-yo shops and locations and rebrand them,” said SweetFrog CEO and Boxwood managing partner Patrick Galleher. “It’s kind of like banks when they enter a new market: it buys existing banks there and rebrands them.”

The Hoopla locations are throughout upstate New York and will be rebranded as SweetFrog stores. SweetFrog will take corporate ownership over the stores but plans to retain Hoopla’s staff at each location. The financial terms of the deal were not disclosed. Hoopla has four remaining locations following the deal, which closed on April 24.

Founded by Richmonder Derek Cha, SweetFrog now has 342 locations, with plans to keep adding to that tally, Galleher said. Seventy-three are corporate owned, and the remaining 269 or so are franchises.

SweetFrog is planning additional acquisitions in Texas, Florida and South Carolina, among other locales.

Galleher said it produces about 2.5 million gallons of frozen yogurt annually and projects over $140 million in sales in 2018.

Boxwood was an early investor in SweetFrog prior to buying a controlling stake from Cha, who held on to a minority stake, as well as ownership of certain locations.

Cha branched off to launch another new food venture, Zzaam Fresh Korean Grill, along with a food court in Carytown.

Convenient that the colors (pink and green) are the same for both companies.