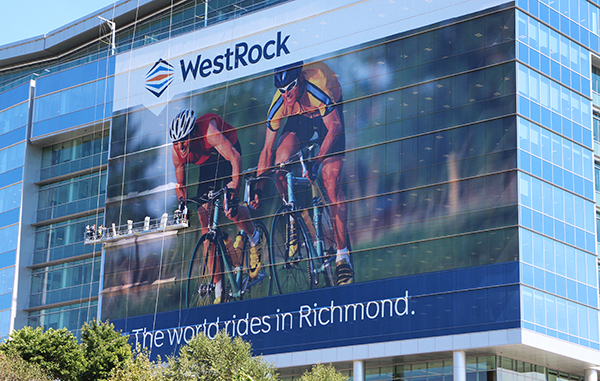 A headquarters change at a packaging giant has chipped a Fortune 500 company off Richmond’s usual list of eight.

The region landed seven companies on Fortune Magazine’s annual list, which was released Monday and ranks the nation’s largest companies nationwide based on revenue from the previous year.

As usual, Henrico-based Altria Group ranked highest among Richmond companies at No. 154. Despite posting more annual revenue than the previous year ($19.4 billion versus $19.3 billion), the tobacco giant fell six spots from No. 148.

The only loss for Richmond was WestRock, the packaging company formerly known as MeadWestvaco. WestRock made the list at No. 194, but is now classified as headquartered in Atlanta, despite maintaining a presence in the local market.

Dominion Energy was the only local firm to jump in the rankings, moving up five spots to No. 233. The utility posted $12.5 billion in revenue, up from $11.7 billion last year.

Owens & Minor took the biggest plunge among all local companies, falling 30 spots from No. 288 to No. 318. The healthcare logistics company posted $9.3 billion in revenue, down from $9.7 billion last year.

Across Virginia, 21 companies made the list, with NoVa-based Freddie Mac ranking highest at No. 38.

Nationally, Walmart retained its top spot on the list for the sixth consecutive year, posting $500 billion in revenue. Electric-car maker Tesla made the largest jump from last year, leaping from No. 383 to No. 260 on the list, which can be viewed here.

This is disappointing as WestRock was a victory for the Greater Richmond Partnership. Time to go out there and recruit a few more Fortune 500 companies to make up for the loss! With the city moving in the direction it is, it should be an easy sell!

No more unless the deal is worth it to the City. We recruited several firms and they have mergedorLEAVE after the incentive period is done. Meade/WestRock was given $6 million dollars in taxpayer funds and were to create 200 new jobs. We ended up with 50 new jobs after 10 years and they have all but abandoned Richmond.

Agreed! You would think that companies would be clamoring to move to Richmond (and stay here) given all the accolades it has received as of late. Is Richmond really that difficult to convince companies to move to…and stay here? Either all the accolades are BS or there is something else going on that is keeping major companies away. I’d like to know if even the interest level has increased. Anyone at GRP who can help?

What accolades has the city of Richmond gotten lately? – Coliseum is in shambles and they can’t figure it out – tossed huge money at an out of town brewery and no return – tossed huge money to the NFL and no return – trying their best to get AA baseball to leave town – can’t pass a cigarette tax to help schools but will tax dining. About the only thing that was on the upswing within city limits – public schools are in a complete shamble – didn’t learn any lessons from Charlotte on what free public parking does… Read more »

You totally missed the target of my comment about accolades. I was NOT referring to ONLY the City of Richmond. I was referring to the Richmond Metro area as a whole (that is also exactly how the Fortune 500 count is calculated). As far as accolades with regard to the Richmond area, there have been many lately (go to grpva.com to see most of them). I know about the City of Richmond’s woes, but the area is catching the critical eye from someone because it seems that there is a new accolade every month or so. I think the area… Read more »

What a shame. MeadWestvaco built a nice building downtown and then the execs got seduced by the Real Housewives of Atlanta.