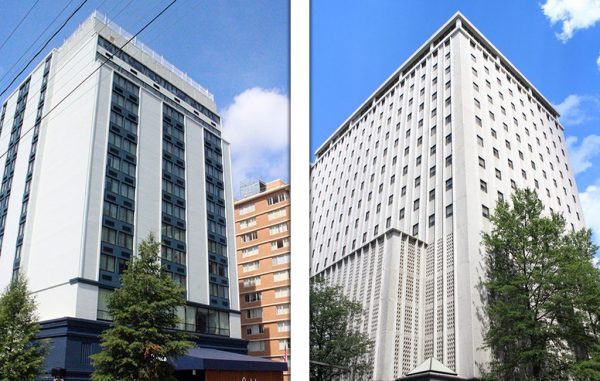 In the world of rooftop bars, height matters.

So much so that a debate arose in recent weeks between two of Richmond’s rooftop spots, as they disagreed on which venue is the highest.

The beef was between the ventures atop The Graduate Richmond at 301 W. Franklin St. and the Hampton Inn/Homewood Suites at 700 E. Main St.

Upon opening its rooftop restaurant and bar, The Byrd House, The Graduate claimed to the media and in an ad campaign it had the tallest such establishment among its peers in the city, sitting atop the hotel’s 16 floors.

The claim drew rebuttal from the owners of Kabana Rooftop on the Hampton Inn and Homewood hotel, which claimed its bar was taller, sitting atop 20 floors.

The Graduate defended its initial claim, saying though the building has fewer stories, The Byrd House is technically higher than Kabana based on elevation above sea level. The Graduate is located at 301 W. Franklin St, three-quarters of a mile west and uphill from Kabana. 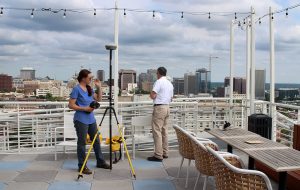 Kabana still didn’t budge from its stance. In the end, BizSense stepped in to settle the score and set the record straight.

Enter Nyfeler Associates, a civil engineering firm based near VCU that specializes in land surveying and mapping.

Knowing that owner George Nyfeler is up for anything, BizSense enlisted his firm as an objective third party.

Nyfeler and survey crew chief Karen Biskie obliged, and on Monday went to both bars with a Real Time Kinetic GPS – a $23,000 piece of hardware that measures coordinates relative to the gravitational center of Earth using U.S. and Russian satellites.

Now, for the official measurements:

That 18 feet unequivocally allows Kabana Rooftop, operated by LX Group, to lay claim as the highest and tallest rooftop bar in Richmond.

Alisha Wieckmann, LX Group’s director of marketing, said they were prompted to defend the title after seeing The Graduate’s ads.

“I mean, I understood where they were coming from with elevation and such. But we are not that far in the Bottom,” Wieckmann said. “When people find out there’s a place they can go where they can eat, drink and get a view, it’s helpful for marketing.”

What the folks at the Byrd House need to do is claim that their guests get higher than any other bar in town. Let a civil engineer try and disprove that.