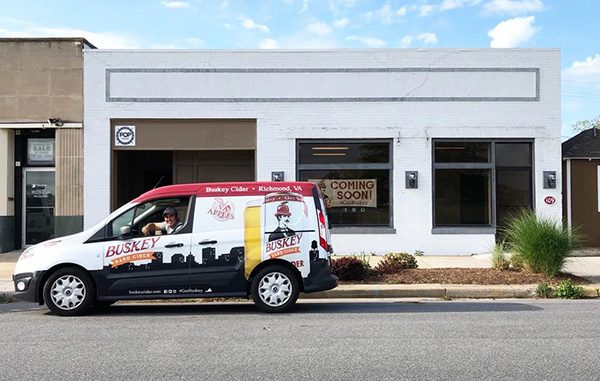 A local cidery is heading east to plant some seeds near the Chesapeake Bay.

Buskey Cider, which opened in Scott’s Addition in 2016, is opening a satellite taproom in Cape Charles on Virginia’s Eastern Shore.

The outpost, dubbed Buskey Cider on the Bay, will add to the company’s flagship location in Richmond at 2901 W. Leigh St.

Elle Correll, Buskey’s marketing director and wife of founder and CEO Will Correll, said the expansion plans came together quickly after hearing about Cape Charles from a customer.

“It started about a month ago, which sounds crazy, but one of our cider club members said she bought a house in Cape Charles and said we should think about it,” Correll said. “There aren’t many cideries on the Eastern Shore and we didn’t want to step into someone else’s area. Everything just fell into place.”

Buskey is leasing the 1,000-square-foot space at 109 Mason Ave. in Cape Charles, about a block from the bay.

With a population of just over 1,000, Cape Charles is mostly a summer vacation town, and Correll said the peak season there is from Memorial Day through Labor Day.

There will not be a production area in the new location, as Buskey plans to send its cider from Richmond.

“We’ve always been distribution-focused, and that’ll continue to be our main focus. It’ll be great to have higher margins at a tasting room, though,” Correll said.

Buskey has said previously it sells 90 percent of its cider through distribution, with the rest through its taproom. It distributes cans and kegs, and sells crowlers – 32-ounce cans filled from taps – at its Richmond taproom where it pours more than 10 types of cider.

The cidery’s distribution footprint includes Hampton Roads, Southwest Virginia and about 100 locations in the Richmond area.

Buskey had a soft opening for the new spot last weekend and is planning a grand opening on June 16.

Correll said construction is still wrapping up, and Ross Trimmer of Sure Hand Signs has been hired to paint a sign for Buskey on the bay.

Buskey joins local breweries Isley Brewing Co. and Legend Brewing in seeking the eastern part of the state for growth. Legend opened a satellite taproom in Portsmouth last summer, and Isley is preparing to open a taproom in Virginia Beach.